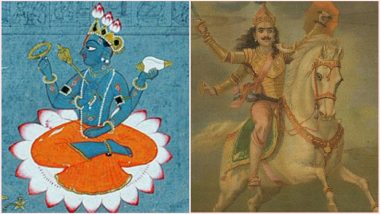 Kalki, also known as Kalkin or Karki is the future tenth incarnation of Hindu Lord Vishnu at the end of Kali Yuga. In the Vaishnavism cosmology, Kali Yuga is explained as one of the four periods in the endless cycle of existence. During Kalki Jayanti, special puja is organised in Vishnu temples across the country. Devotees follow age-old traditions and some even keep fasts on the occasion of the birth anniversary of Kalki. Kalki Jayanti 2019 falls on August 5. Numerous myths and traditions are associated with the tenth avatar of Vishnu. On the auspicious occasion, know the mythological legend and significance of the descent of Hindu Lord Vishnu. Sawan 2019 Calendar and Dates: Shravan Month Schedule & Solah Somvar Vrat Puja Vidhi to Please Lord Shiva.

Kalki is an avatar of Lord Vishnu. The name is said to have derived based on Kal, which means “time.” Kalki means “empowering voice.” The Garuda Purana, one of the 18 Mahapuran of texts in Hinduism means lists ten avatars of Lord Vishnu, with Kalki being the tenth and final. He is described to have appeared during the end of Kali Yuga. Kalki ends the darkest, degenerating and chaotic stage of that period to end the evil and ushers in the Satya Yuga, “The Yuga of Truth” in Hinduism. He rides a white horse with a fiery sword. Kalki is also described as a Brahmin warrior in the Puranas.

During the holy occasion of Kalki Jayanti, devotees visit Lord Vishnu temples and seek his blessings. They also forbid themselves from eating any non-vegetarian food, while others eat fruits and some observe fasts to impress the Lord and wash off their sins.

(The above story first appeared on LatestLY on Aug 05, 2019 06:30 AM IST. For more news and updates on politics, world, sports, entertainment and lifestyle, log on to our website latestly.com).