We bring you Karadaiyan Nombu 2021 easy kolam designs, the latest muggulu ideas, stunning rangoli patterns, and Swastik Padi kolams to celebrate the Tamil festival. Each of the patterns has a dedicated tutorial video to guide you create the perfect kolam designs. 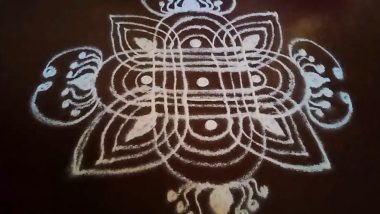 Karadaiyan Nombu (Nonbu) 2021 is on March 14. The festival performed by married women from the Tamil Brahmin community is observed annually on the first day of Pisces in the southern calendar as it represents the fish-like shape of the eyes of Goddess Parvati. Married women pray to Hindu goddess Gauri, keep Savitri vratham and follow other rituals on Karadaiyan Nombu. Along with the traditions, they also make beautiful kolam patterns at their homes, which is considered auspicious. This is why, we bring you Karadaiyan Nombu 2021 easy kolam designs, the latest muggulu ideas, stunning rangoli patterns, and Swastik Padi kolams to celebrate the Tamil festival. Each of the patterns has a dedicated video to guide you create the perfect kolam designs.

Karadaiyan Nombu is a major Tamil festival. Kerada is the unique Nivedyam prepared on the day, and Nombu means Vratham or upvasam. The festival is revered to the legend of Savitri’s devotion towards the Goddess Gauri that gave her the strength to win back her husband’s life from Lord Yama. An offering made out of rice and jaggery, known as Karadai, is prepared and offered to the Goddess. In addition, married women also create beautiful traditional kolam patterns on the front door of their house, centre and home temples to worship Goddess Gauri. These latest Swastik Padi kolams, Muggulu designs and rangoli patterns video tutorials will help you create the stunning traditional rangoli designs at home for Karadaiyan Nombu 2021.

Rangolis are considered extremely auspicious on any occasion. Devotees also believe that creating bright and colourful patterns upholds the tradition, brings positivity and good luck to the home. We wish you and your family a blessed Karadaiyan Nombu 2021!

(The above story first appeared on LatestLY on Mar 13, 2021 06:16 PM IST. For more news and updates on politics, world, sports, entertainment and lifestyle, log on to our website latestly.com).