Maha Kumbh Mela 2021 Shahi Snan Dates and Shubh Muhurat: Why is Haridwar Kumbh Considered Auspicious? From Legends to Holy Rituals, Everything You Want to Know

Maha Kumbh Mela 2021 & Shahi Snan Dates and shubh muhurat is being highly searched for now that the time of festivities is upon us. This time Mahakubh is celebrated a year before and is being organized on 11 years instead of 12 years in Haridwar. 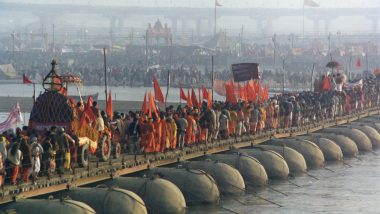 Maha Kumbh Mela 2021 & Shahi Snan Dates and shubh muhurat is being highly searched for now that the time of festivities is upon us. This time Mahakubh is celebrated a year before and is being organized on 11 years instead of 12 years in Haridwar. There is a lot of enthusiasm among the devotees regarding this festival and it is said to be one of the biggest meet of many sadhus and sants to earn virtue. By bathing in Mahakumbh, one attains virtue.  At the same time, it is believed that by taking bath in Kumbh also protects the souls of the fathers and forefathers. This time, there will be four royal (Shahi) and six main baths in Kumbh. Kumbh Mela is held after 12 years, but due to the difference in panchang, it is celebrated in 2021. T

According to the Padma Purana, a person who takes a bath in Mahakumbh attains salvation. Among the pilgrimages, Sangam is considered the suzerain of all the pilgrimages. It is said that drops of nectar fell at these sites and therefore holy bathing(snan) at these places holds special significance. It is said that taking a bath here purifies the body and soul. People here also offer prayers to their ancestors. Mahakumbh is organised every 12 years. In Hinduism, a dip in the Sangam after the royal bath of the akhadas has great religious significance. During Kumbh festival, devotees take dips one to five times, while the Nagas of the Akharas take a dip in the river for one thousand eight times.

Kumbh Mela has great importance in Hinduism. According to ancient religious texts, the story of the Kumbh Mela begins with the churning of the sea (Samudra Manthan), when a war situation arose over the nectar among the gods and asuras. When the sea churning between the gods and the asuras started with the help of Mandar Parvat and Vasuki Nag, a total of 14 gems came out of it. Of these, 13 gems were distributed among the gods and asuras, but when the nectar was produced from the urn, a situation of war arose on both sides to achieve it. Asuras wanted to be immortal after consuming nectar, the gods were not ready to share even a drop of it with the demons. In such a situation, Lord Vishnu took the form of Mohini and took the Amrit Kalash with himself. He gave this urn to Jayant, son of Indra.

When Jayant was running away from the demons to save the Amrit Kalash, then some drops of Amrit from the Kalash fell on the earth. In the four places where these drops fell - Haridwar, Prayagraj, Nashik and Ujjain, the Kumbh Mela is held every 12 years.

(The above story first appeared on LatestLY on Jan 20, 2021 01:39 PM IST. For more news and updates on politics, world, sports, entertainment and lifestyle, log on to our website latestly.com).