Maharana Pratap Jayanti 2019: Facts to Know About The 13th Rajput King of Mewar on His 479th Birth Anniversary

Born in a royal Rajput family of Mewar on May 9, 1540, Maharana Pratap was a Rajput king of Mewar in Rajasthan area and was famous his bravery in the region. 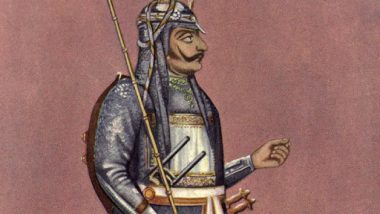 Popularly known as Maharana Pratap, Pratap Singh-I was a Rajput king of Mewar in Rajasthan area and was famous his bravery in the region and his fight at Haldighati. Born in a royal Rajput family of Mewar on May 9, 1540, Pratap was the second son of King Udai Singh-II and queen Jaiwanta Bai, who had seven children.

Maharana Pratap became the king of Mewar after the death of Uday Singh in 1572. Though Rani Dheer Bai wanted her son Jagmal to succeed him, Pratap was a preferred choice by senior courtiers. Tantia Tope 160th Death Anniversary: Remembering Rani Laxmi Bai's Top Lieutenant in 1857 Rebellion

When Mughal emperor Akbar invaded Mewar in 1568, the bloody Siege of Chittorgarh took place which led to the loss of the fertile eastern belt of the region, but Rana Pratap with his valour managed to save the rest of the wooded and hilly kingdom. In 1972, Mughal emperor sent a number of envoys entreating the Rana to become a vassal like many other Rajput leaders in the region. As Rana refused to personally submit to Akbar, the war became inevitable.

With this Battle of Haldighati was fought on June 18, 1576, between Maharana Pratap and Akbar's forces under the leadership of Man Singh-I of Amer. Though Mughals won the battle, but were but failed to capture Maharana Pratap. In that battle, Maharana found himself wounded, but eventually managed to escape.

With Mirza Hakim's incursion into Punjab, the Mughal's shifted their focus in 1582 and Maharana Pratap took the opportunity to occupy Mughal post at Dewair (or Dawer). From 1585 to 1597, Akbar remained in Lahore watching the situation in the north-west and till that time no major Mughal expedition was sent to Mewar.

As situations favoured, Maharana captured Western Mewar including Kumbhalgarh, Udaipur and Gogunda. Also, he built a new capital Chavand, near modern Dungarpur. According to some reports, Maharana Pratap died of injuries sustained in a hunting accident at Chavand on January 19, 1597, at aged 56 years.

(The above story first appeared on LatestLY on May 09, 2019 07:00 AM IST. For more news and updates on politics, world, sports, entertainment and lifestyle, log on to our website latestly.com).