National Integration Day 2022: From Date To History and Significance, Here's Everything You Need to Know About the Day Marking Birth Anniversary of Indira Gandhi

The day sends out an underlying message of unity and the importance of integration, regardless of race, religion, or caste. National Integration Day is observed to promote peace, unity, and integration between all of the different segments of society. 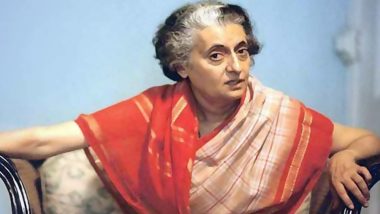 Mumbai, November 18: National Integration Day is celebrated annually on November 19 as an Indian celebration that commemorates the birthday of the country’s first-ever female Prime Minister, Indira Gandhi. The day is also known as Quami Ekta Divas. Educational institutions and offices across India remember her fearless leadership and the ways in which she changed the country.

The day sends out an underlying message of unity and the importance of integration, regardless of race, religion, or caste. National Integration Day is observed to promote peace, unity, and integration between all of the different segments of society. The day is for developing a better understanding and strengthening the unity of people in society in India. Rajasthan Government's Indira Gandhi Urban Employment Scheme Offers Guaranteed Jobs To People in Urban Areas, Know All About CM Ashok Gehlot's Mega Employment Initiative Which Is Making Impact on Ground.

Born to India's first Prime Minister Jawaharlal Nehru and his wife, Kamala Nehru on November 19, 1917, Indira was always a bright child. In 1942, at the age of 25, she married Feroze Gandhi, who was a freedom fighter, politician, and journalist. She was elected as the president of the Indian National Congress in 1959. Indira Gandhi Death Anniversary 2022: Congress President Mallikarjun Kharge, Sonia Gandhi and Other Party Leaders Pay Tributes To Former Prime Minister.

Indira Gandhi took over as India’s first female Prime Minister in 1966 and held the office for 11 years. In between, she played a major role in strengthening the democratic structure, and the country's all-around development. During her regime, India underwent tremendous and dramatic changes. However, she was ousted from Prime Minister's office after losing her battle for reelection in 1977, only to be voted back in again in 1980. The country's first female PM was assassinated at her home on October 31, 1984, by two of her own bodyguards in New Delhi. The day is then marked as National Integration Day to honour her legacy.

(The above story first appeared on LatestLY on Nov 18, 2022 10:52 PM IST. For more news and updates on politics, world, sports, entertainment and lifestyle, log on to our website latestly.com).