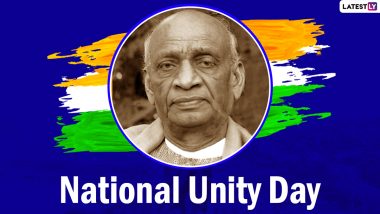 National Unity Day or Rashtriya Ekta Diwas is celebrated on October 31 in India. This year it falls on a Saturday. It is celebrated on the birth anniversary of Sardar Vallabhbhai Patel. The Government of India declared October 31 as the National Unity Day in 2014, since then every year this day is celebrated with pride. This year marks the 144th birth anniversary of Sardar Patel, one the prominent figures in Indian freedom struggle. International Internet Day 2020 Date And Significance: Know The History And Events Related to the Observance That Celebrates the Invention of Internet.

Sardar Vallabhbhai Patel was the first Home Minister of the independent India. He played a key role in unifying  India. He brought the princely states under the Union of India including making the Nizam of Hyderabad to join India. Patel also played an important role in shaping the constitution of India. He also headed the Advisory Committee set up by the Constituent Assembly on January 24, 1947. The Committee’s responsibility was to prepare an interim report on the fundamental and minority rights. World Stroke Day 2020 Date and Theme: Know History and Significance of The Observance.

This justifies the birth anniversary of the Iron Man of India, Sardar Vallabhbhai Patel to be celebrated as the Rashtriya Ekta Diwas. On this day 'Run for Unity' is organised every year, to create awareness about this day as well as the contribution of Sardar Patel in shaping India as we know it today.

(The above story first appeared on LatestLY on Oct 29, 2020 06:00 PM IST. For more news and updates on politics, world, sports, entertainment and lifestyle, log on to our website latestly.com).