World Homeopathy Day 2021: Know History, Significance of the Day That Honours Contirbution of Homeopathy to Medicine and Treatment

'Like cures like', a philosophy that the practice of homeopathy has religiously followed. On April 10, the world celebrates and honours homeopathy for its contribution to medicine and treatment of people in the form of World Homeopathy Day. In addition, the day also pays tribute to Dr. Christian Friedrich Samuel Hahnemann, the father of homeopathy. 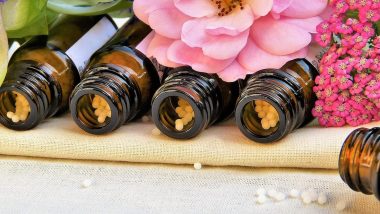 'Like cures like', a philosophy that the practice of homeopathy has religiously followed. On April 10, the world celebrates and honours homeopathy for its contribution to medicine and treatment of people in the form of World Homeopathy Day. In addition, the day also pays tribute to Dr. Christian Friedrich Samuel Hahnemann, the father of homeopathy.

Homeopathy is a form of medical practice that believes in using natural ingredients as cures for ailments. According to it, if a substance can lead or develop symptoms of the disease in a healthy person, it certainly has the quality of curing or treating the one already suffering from the disease. World Homeopathy Day 2021: From Long Lasting Effects to Being Made From Natural Substance, Here Are 5 Facts About Homeopathic Medicine.

How Does it Work?

Homeopathy treats any sick person through remedies that are prepared using homeopathic dilution. Homeopathy practitioners, known as homeopaths, prepare the remedies by repeatedly diluting the selected substance until the final product is chemically indistinguishable from the diluent. The remedy is to be taken orally as per the practitioner. Under homeopathy treatment, no operation or surgery is done.

Born on April 10, 1755, in Paris, Dr. Hahnemann, a German, while translating the medical treatise of Scottish physician William Cullen into German, conceived the idea of homeopathy. In 1807, the word ‘homeopathy’ appeared in print for the first time.

He believed and rejected the mainstream medicine of the late 18th century on grounds of it being ineffective and often harmful and thus started experimenting with the practice of homeopathy for treatments.

In the 19th century, the practice got hugely popular in the US and Europe. It reached the United States in1825 and in 1835; the first homeopathic school was opened in the States.

However, by the end of the century, homeopathy started fading out with the last homeopathic medical school closing in the US in 1920. But, in 1970, homeopathy made a remarkable return as sales for homeopathy products started growing unexpectedly.

Homeopathy, in India, saw daylight when Dr. John Martin Honigberger, came to India in 1810. He arrived at Lahore in 1829-1830 and was later invited to treat Maharaja Ranjit Singh of Punjab. Later on, he went to Calcutta and started his practice there. He was also known as the 'Cholera Doctor'.

Mahendra Lal Sircar was the first Indian who became a homeopathic physician.

In present times, the popularity of homeopathy has resulted in homeopathy colleges and institutions and a number of people seeking treatment in homeopathy. Also, India is among the biggest homeopathic drug manufacturers and traders.

Homeopathy in India falls under the purview of the Ministry of AYUSH, which is working towards popularising the practice.

Homeopathy and Ministry of AYUSH

The Ministry of AYUSH in the last few years has been working to promote the practice of homeopathy. This year, the theme of the celebration is “Homeopathy- Roadmap for Integrative Medicine”.

It has been working towards strengthening education and infrastructure to promote the practice of homeopathy in the country.

Over the years, homeopathy has attracted criticism for being a pseudoscientific medical practice due to the lack of statistical evidence of therapeutic efficacy and scientific justifications. It is often termed quackery and fraud.

In several countries like France and Switzerland, it has also been declared ineffective. Spain has banned homeopathy in the country.

However, the 2019 WHO report found that 100 out of 133 Member States surveyed in 2012 acknowledged that their population used homeopathy. In 13 countries, it is regulated including Sri Lanka and Pakistan.

Its benefits include no side effects, and its non-toxic properties make it safe to be used with kids. They are also relatively inexpensive compared to other forms of medical treatment.

(The above story first appeared on LatestLY on Apr 10, 2021 12:36 PM IST. For more news and updates on politics, world, sports, entertainment and lifestyle, log on to our website latestly.com).