As World Rainforest Day 2021 celebration approaches, here we have mentioned a few interesting facts about the home of half of the world’s plant and animal species. 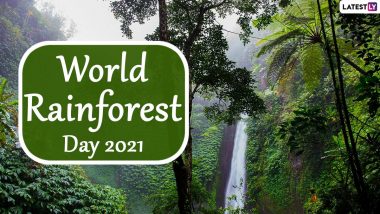 World Rainforest Day is celebrated by several people across the world every year on June 22. Rainforests are important for the survival of life on planet Earth. Rainforests are home to half of the world’s animal and plant species. They stabilize climate patterns and absorb carbon dioxide from our environment. However, 15 % of global carbon dioxide emissions happen due to deforestation which leads to climatic change. So, to encourage people to take action against saving rainforests, World Rainforest Day is observed.

On June 22, 2017, the first World Rainforest Day was celebrated. The event was organised by a collaboration of groups called the Rainforest Partnership. It is based in Austin, Texas and it is an international non-profit organization. It is dedicated to regenerating and protecting tropical rainforests through community-based projects in the Amazon. As people across the world are currently gearing up to celebrate World Rainforest Day; thus, here we have mentioned a few interesting facts about the planet’s ecological powerhouses.

Know we hope you know why rainforests are so diverse. And that is why we should all take a pledge to conserve the rainforests. Here’s we wish you all a Happy World Rainforest Day 2021.

(The above story first appeared on LatestLY on Jun 21, 2021 12:55 PM IST. For more news and updates on politics, world, sports, entertainment and lifestyle, log on to our website latestly.com).