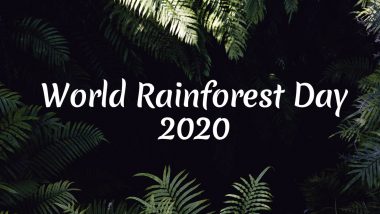 World Rainforest Day is observed on June 22 to raise awareness about protecting the rainforest. It highlights the need to help protect rainforests and encourage actions to protect them. The first World Rainforest Day was observed on June 22nd, 2017. It was created by groups called the Rainforest Partnership, an international non-profit organization based in Austin, Texas to protect and regenerate tropical rainforests through community-based projects in the Amazon. The day is dedicated to protecting rainforests and community-based projects in the Amazon. International Day of Forests 2020: Congo Basin to Amazon Basin, 5 Dense Forests From Around The World (Watch Videos)

Rainforests play an important role in keeping the planet healthy. They absorb the carbon dioxide in the air, and circulate more than 20 per cent of the world’s oxygen. The rainforest includes over half of all the animal and plant species as well as a fifth of the world’s freshwater. However, the rainforest is under threat especially due to deforestation. Hence, World Rainforest Day 2020 is of utmost importance is to raise awareness about the forest and how humans are connected to it. Ancient Baobab Trees Called 'Tree of Life' Are Slowly Dying Due to Climate Change in Southern Africa: Research.

Around three hundred million people around the world live in forests and 1.6 billion are depended on them for their livelihoods. Forests provide habitat and array of plants and animals, many of which are still undiscovered. They are essential and home to the world’s terrestrial biodiversity. The day tries to make people aware that rainforests are essential to our survival and are responsible for more than 25% of all Western medicine. They only cover two per cent of the planet’s surface area and are dense and concentrated. These forests provide is the livelihood for indigenous populations making it, even more, a precious resource.

(The above story first appeared on LatestLY on Jun 22, 2020 01:26 PM IST. For more news and updates on politics, world, sports, entertainment and lifestyle, log on to our website latestly.com).