Greek Cuisine: From Pastitsio to Frappe, 5 Traditional Mediterranean Food and Beverages To Die For

The Greek food is significantly made with fresh vegetables, fishes and seafood. Due to its long coastline, meat is treated less popular with an exception of lamb. The main characteristic of Greek food is olive oil which is used in most dishes. 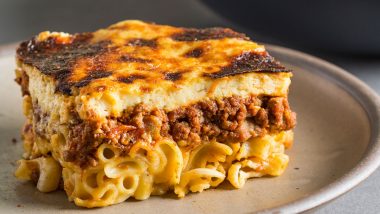 Greece, the Mediterranean country is known for its Greek food which is highly influenced by both Eastern and Western cultures.

The Greek food is significantly made with fresh vegetables, fish and seafood. Due to its long coastline, meat is treated less popular with an exception of lamb. The main characteristic of Greek food is olive oil which is used in most dishes. We at LatestLY, have curated a list of traditional Greek food that you must try. What Is Mediterranean Diet? Important Tips and Diet Plan for Beginners

The traditional Greek recipe of Lasagna consists of baked layered of pasta, juicy minced beef, bechamel and tomato sauce and is topped with melted cheese. It just melts into your mouth with the flavour of cheese and meat.

This is one of the most favourite traditional Greek dishes. It’s creamy and made up of spices meat cooked in tomato sauce and then layered with fried eggplant and bechamel sauce. Nobody would have ever thought that an eggplant-based dish could taste as delicious as Moussaka.

Have it during daytime or night, it tastes as tasty as always. It is a sweet pie made with phyllo pastry and semolina custard. It is one of the most loved desserts of Greek cuisine.

Tiny dolmas made with stuffed grape leaves are traditionally served as appetisers with lemon wedges.  It can be served warm or cold. It is one of the most iconic Greek cuisines.

One of the most common coffees loved by many comes from Greek cuisine. Frappe is an iced coffee drink loved by many to kill the scorching heat during Summers.

Greece is not just a beautiful country to visit, but the food here is also one of its kind. With a variety of appetizers to desserts you just can’t miss these above-mentioned unbelievably tasty dishes of the Greek culture.

(The above story first appeared on LatestLY on Jan 27, 2022 05:41 PM IST. For more news and updates on politics, world, sports, entertainment and lifestyle, log on to our website latestly.com).