Hanukkah 2021: Facts About Hanukkah Foods Eaten During The Eight-Day Festival

The eight-day Hanukkah festival starts on November 28 this year. These eight days, we witness grand, old age and contemporary traditions. People indulge in traditional food like Latkes, sufganiyat etc and celebrate the festival with their family and friends 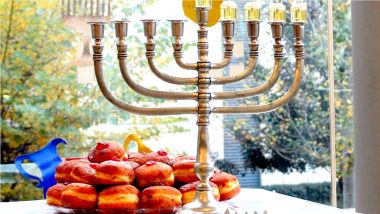 Hanukkah is the most important festival of the Jewish community. Also known as Chanukah, it is celebrated to commemorate the rededication of the second temple in Jerusalem during the Maccabean Revolt.

The eight-day Hanukkah festival starts on November 28 this year. These eight days, we witness grand, old age and contemporary traditions. People indulge in traditional food like Latkes, sufganiyat etc and celebrate the festival with their family and friends. Celebrating this auspicious day, we at LatestLY, have brought together some amazing facts about the traditional Hanukkah food that you must know.  From Loukoumades to Pancakes, Know About Traditional Food Recipes Made on the Jewish Festival

It is the money given as presents during the Hanukkah festival. It is given to children and teachers in the game of Dreidel.

Kugel was transformed when noodles became the ingredient of choice for Jewish housewives in the sixteenth century. Sweet, diary-based kugel with sour cream and cream cheese became a reminder of Judith’s courageous actions.

The cream cheese in the dough of rugelach makes it perfect Hanukkah food. You may also whip some rugelach cookies to celebrate Hanukkah in a sweet way.

Fried food is very essential at every Hanukkah celebration. The main preference of the preparation is olive oil, but rendered poultry fat can also be used for fried or cooking.

Deep-fried dough puffs dipped in sugar or honey symbolize cakes eaten by the Maccabees and hence connect it to the history of the holiday.

As dairy and oil are an important part of Hanukkah food, Latke is perfect and most served during the festival.

The sweet sufganiyat is made in the shape of doughnut and is prepared in a lot of oil.  As the dish is made up of a lot of oil, it is a very important part of Hanukkah food.

Just like Indian sweet Jalebi, Zalabia is a batter poured in extremely hot oil in swirl-like formation. As the Hanukkah foods are made in oil, therefore zalabia made it to the list.

Pancake was one of the easiest and quickest food items for the Maccabees and was also made in oil, therefore it made it to the list of Hanukkah foods.

As you enjoy Hanukkah food this year, make sure you know the fact and how they made it to the list of Hanukkah foods. Wishing everyone Hanukkah 2021 Sameach!

(The above story first appeared on LatestLY on Nov 26, 2021 10:29 AM IST. For more news and updates on politics, world, sports, entertainment and lifestyle, log on to our website latestly.com).