Crude Oil Bath Can ‘Cure’ Diseases Claims Azerbaijan Doc; But Here’s Why Exposure to the 'Black Gold' is Dangerous for Health!

In Azerbaijan taking a dip in heated crude oil is said to have numerous health benefits, which includes curing muscular, skin and bone conditions as well as gynaecological problems. 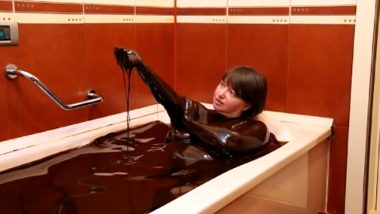 Have you ever wondered what it would feel like to take a bath in crude oil? Doesn't sound too relaxing right? You may be surprised to know that a doctor from Azerbaijan claims that a crude oil bath can cure a variety of diseases. However, exposure to crude oil or the 'Black Gold' of Azerbaijan has some serious dangers and side effects associated with it. Here's what we should know.

In Azerbaijan taking a dip in heated crude oil is said to have numerous health benefits, which includes curing muscular, skin and bone conditions as well as gynaecological problems.  Oil deposits in Azerbaijan were explored in the mid-19th century; it was then the part of the Roman Empire. This place is first in the world to start commercial oil production. Azerbaijan's economy largely depends on oil, but the crude that comes from subsoil reservoirs in Naftalan, a small city in Azerbaijan is not suitable for commercial use. The locals in Naftalan use their crude oil for petroleum spa and other health remedies. Swallowing Semen Can Prevent Miscarriage Says Study; 7 Other Benefits You Didn’t Know Of.

VIDEO: Ever since Soviet times people have been flocking to the town of Naftalan to immerse themselves in crude oil.

Azerbaijan's "black gold" is reputed for its therapeutic properties, despite some specialists warning the method has dangerous side-effects

The Dangers and Side Effects of Crude Oil Exposure

According to the U.S. National Library of Medicine, breathing fumes from crude oil can cause difficulty in breathing, headaches, nausea, dizziness and confusion. When crude oil comes in contact with skin, it can causes rashes, skin irritation, burning and swelling. Swallowing crude oil cause vomiting, diarrhoea and stomach upset. Apart from all these side effects, crude oil bath can cause kidney damage, infertility and blood disorders in the long run. Vietnamese People Are Setting Their Face on Fire For Youthful Skin, Bizarre Beauty Trend Goes Viral.

But despite these obvious hazards of crude oil, "experts" and charlatans in Azerbaijan have been peddling the bizarre spa treatment, claiming that they help cure illnesses. Far from healing, crude oil can cause irreversible damage to the human body in the long run.

(The above story first appeared on LatestLY on Apr 12, 2019 12:47 PM IST. For more news and updates on politics, world, sports, entertainment and lifestyle, log on to our website latestly.com).