The India Meteorological Department (IMD) on Sunday reported that some areas in Delhi saw mercury crossing 49 degrees Celsius, while neighbouring Gurugram in Haryana recorded 48.1 degrees Celsius, the highest since 1966. 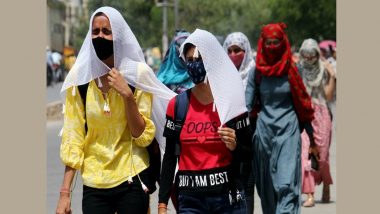 New Delhi, May 16: Even as several parts of North India, including the national capital, sizzled due to intense heatwave, high blood pressure patients may be at particular risk, said experts on Monday, ahead of World Hypertension Day, observed annually on May 17.

The mercury leaped to a whopping 47.4 degrees Celsius in several areas in Punjab, and several areas in Jammu, Madhya Pradesh, and Mumbai also saw significant heat waves. The weather office has also predicted some relief from the heatwave from Monday evening owing to inclement weather.

According to experts, during extreme summer weather, the body attempts to radiate heat which affects blood pressure levels. An increase in temperatures and humidity can raise blood flow to skin, causing the heart to beat faster while circulating twice as much blood per minute than on a normal day. Heatwave in India: Health Experts Warn of Rise in Heat-Related Ailments, Ask People to Take Precautions

"Intense atmospheric temperature leads to increased blood flow to skin, causing a spike in sweating and dehydration. This leads to decrease in blood pressure especially on changing postures, that is, while getting up from a lying down or sitting position," Dr Ajay Agarwal, Director and HOD - Internal Medicine, Fortis Hospital, Noida, told IANS.

During summers, there is also widening or expansion in our blood vessels which leads to lower pressures of blood. Excessive sweating and loss of sodium through profuse sweating could be another major reason for low blood pressure.

"Some people are at higher risk of being affected by humidity, including people over 50, those who are overweight, or those who have heart, lung or kidney conditions. Heat and sweating also can lower the amount of fluid in the body, which can reduce blood volume and lead to dehydration. This can interfere with the body's ability to cool off and may create strain on the heart," Dr Ramakanta Panda, world's leading cardiac surgeon and head of Asian Heart Institute, Mumbai, told IANS.

According to Panda, when the temperature is high, it increases the discomfort and stress hormone levels in the body, affecting sleep patterns.

"Lack of sleep or less sleep in the long run is also linked with multiple health issues such as obesity, diabetes and heart disease, which can indirectly affect BP levels in hypertensive patients," he noted.

Panda advised BP patients to get adequate sleep of at least 8 hours during summer months.

"The population above 50 with low blood pressure are more vulnerable. So it is advisable for people who have a history of low BP to monitor their blood pressure regularly and also consume liquids and electrolytes to stay hydrated. Rush to the doctor if blood pressure records less than 100 as this is alarming," Dr. Anand Kumar Pandey, Director and Senior Consultant- Cardiology, Dharamshila Narayana Superspeciality Hospital.

The experts suggested people with both low and high blood pressure to drink plenty of oral fluids, salts and remain indoors. Even brief exposure to heat can result in decreased blood pressure and as such they should be monitored carefully.

According to the India Council for Medical Research, one out of every four adults in India has hypertension, with only 10 per cent of patients having their blood pressure under control. Hypertension is the main risk factor for cardiovascular diseases, especially coronary heart disease and stroke, as well as for chronic kidney disease, heart failure, arrhythmia and dementia.

(The above story first appeared on LatestLY on May 16, 2022 07:20 PM IST. For more news and updates on politics, world, sports, entertainment and lifestyle, log on to our website latestly.com).