Latest data released by the UK Health Security Agency (UKHSA) showed the number of confirmed monkeypox cases in the country has reached 1,076. 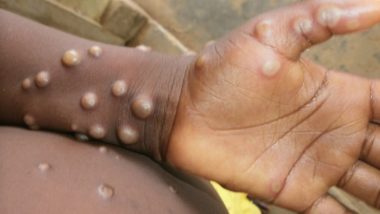 According to UKHSA, up to June 26, 2022, there were 1,076 laboratory confirmed cases in the UK. Of these, 27 were in Scotland, five in Northern Ireland, nine in Wales and 1,035 in England. Since the WHO's previous update on June 17, there have been 1,310 new cases reported, with eight new countries reporting cases, Xinhua news agency reported.

It means almost a third of all cases in the world reported since the current outbreak started have emerged in the UK.

In its latest update issued on Monday, the WHO said since January 1, and as of June 22, there have been 3,413 laboratory confirmed cases and one death reported to WHO from 50 countries and territories in five WHO regions.

WHO said the majority of laboratory confirmed cases, 2,933 of the 3,413 cases, are in the WHO's European region. This accounts for about 86 percent of the total. Monkeypox Not A Global Health Emergency 'At This Stage': WHO.

"The monkeypox outbreak in the UK continues to grow, with over a thousand cases now confirmed nationwide," UKHSA incident director Sophia Makki said, "We expect cases to continue to rise further in the coming days and weeks."

Makki urged people attending large events over the summer, or having sex with new partners, to be alert to any monkeypox symptoms, and get tested rapidly to help avoid passing the infection on."

Currently the majority of cases in Britain have been in men who are gay, bisexual or have sex with men, but UKHSA said anyone who has had close contact with an individual with symptoms is also at increased risk.

With an extensive program of summer music events on the horizon, Makki said if people were concerned they may have monkeypox, they should not go to the events, meet with friends or have sexual contact.

(The above story first appeared on LatestLY on Jun 29, 2022 02:24 PM IST. For more news and updates on politics, world, sports, entertainment and lifestyle, log on to our website latestly.com).