Yoga is Not What You Think It is! On International Day of Yoga 2021, Embrace The Practice For What It Really Is

"Yoga? That's for older people." That was my reaction when someone first asked me to try Yoga for not just getting healthier but my overall well-being. Little did I realise that I would go on to endorse the practice in a few years to follow. 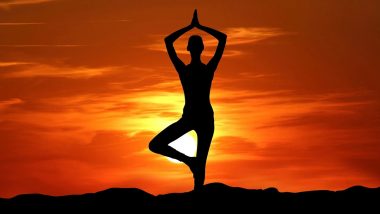 "Yoga? That's for older people." That was my reaction when someone first asked me to try Yoga for not just getting healthier but my overall well-being. Little did I realise that I would go on to endorse the practice in a few years to follow. As we celebrate International Yoga Day 2021, I know for sure, that I'm not the only one who may have reacted that way to the idea of practising Yoga. However, many today diss Yoga, not just because of this misunderstanding but a lot of other notions, which we honestly need to address.

Being a Yoga practitioner, I believe that this practise is for a larger good. It has the power to make you a different person altogether and all for good. But let's first address issues like 'Yoga is a lazy exercise', 'Yoga doesn't help you lose weight', 'Yoga is one religion' and 'Yoga is political'. International Day of Yoga 2021 Date & Theme: Know History, Significance and Other Important Details Related to The Day Celebrating The Ancient Indian Practice of Yoga.

'Yoga is for lazy folks, won't help you lose weight'

That statement, my friend, is all things irony. I've tried losing weight with running and I've tried the same with Yoga. While running helped me lose weight, so did Yoga. The difference was that Yoga helped me not just lose weight, but also build strength. It also helped me stay mentally fit. And, at a time when one couldn't go out running in the middle of a pandemic, Yoga has been a friend! At home, outside, at your office chair, Yoga can be practised just about anywhere. Oh, and if you think Yoga is for lazy folks, try performing 10 slow repetitions of the Suryanamaskar (Sun Salutations), and then, let's talk.

'Yoga Is Bound by Religion'

Yoga is not a religion and it's not associated with just one religion. Yes, the first mention of Yoga is said to have been made in the Vedas. But that doesn't bind its benefit to one religion. Just like Zumba is not about one religion just because the creator may belong to one religion. Yoga is a life practice. There is much more to Yoga than chanting mantras. While one may debate 'Om' chanting's prominence, it does have scientific benefits. It is said that chanting Om relaxes not just your mind but your entire body. Who doesn't want to relax? If you still have doubts, reach out to Yoga trainers, and they'll help you with alternatives.

No political party has the copyright to the practice of Yoga. The biggest mistake you would make while thinking of Yoga is associating it with one person or one political party. Look beyond the hullaballoo of International Yoga Day as a political event and embrace the practice in its true sense. Yoga is way bigger than a person, a religion or a political party. It's now a practice not just in India, but in several developed nations too.

I write this today to look at the larger good. I believe that Yoga, in fact, is something that can bring people together, make them happy, make them fitter. That said, here's making another thing clear. Yoga doesn't make you immortal, it only helps you lead a better, healthier life. When a medical emergency arises, it's best to see a doctor than spreading out a Yoga mat.

(The above story first appeared on LatestLY on Jun 20, 2021 11:51 AM IST. For more news and updates on politics, world, sports, entertainment and lifestyle, log on to our website latestly.com).