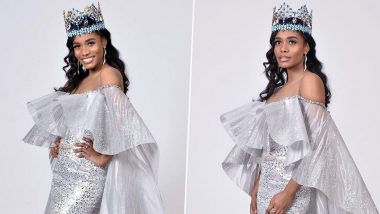 The COVID-19 pandemic has led to the postponement of many famous events around the world. While, some will reportedly go virtual like BAFTA TV, other ceremonies are being cancelled this year and postponed to be held in the upcoming year. Likewise, Miss World 2020 has been cancelled, and the 70th edition will be held in 2021. The organisation announced the same adding that reigning Miss World 2019 Toni-Ann Singh will have to hold onto her crown a little longer, until she is able to crown her successor. Yes, with the decision, Jamaica’s beauty queen becomes the longest-reigning Miss World titleholder in the history of Miss World pageantry.

Toni-Ann Singh is a Jamaican American singer and beauty queen who won the 69th edition of Miss World 2019 pageantry. With her achievement, she became the fourth woman from Jamaica to win Miss World. Julia Morley, Chairman and CEO of Miss World, was quoted saying in media reports, “We have made the decision to delay the 70th Miss World Final. Safety is paramount as we continue the fight against Covid 19. We look forward to welcoming the Miss World family to our very special celebrations next year.”

Morley further stated that the next Miss World finals would be held in the latter part of 2021 and the host country and venue is yet to be confirmed but is expected to be announced soon.

𝗟𝗢𝗡𝗚𝗘𝗦𝗧 𝗥𝗘𝗜𝗚𝗡 | #MissWorld 2019 Toni-Ann Singh from Jamaica is set to become the longest reigning Miss World titleholder in history after the organization announced that the 70th edition of Miss World will be held in the latter part of 2021.#MissosologyBig5 pic.twitter.com/gU8Shu2lv7

24-year-old Singh secured her place in the top 40 by winning the talent completion at the Beauty With A Purpose Gala Dinner in London and advanced to the final round of the competition held in December last year. She won from a field of 111 contestants at the 69th Miss World beauty pageant. In Jamaica, Singh has pledged her support for the Women’s Centre Foundation and named it her Beauty With A Purpose project during her reign.

(The above story first appeared on LatestLY on Aug 02, 2020 09:14 AM IST. For more news and updates on politics, world, sports, entertainment and lifestyle, log on to our website latestly.com).