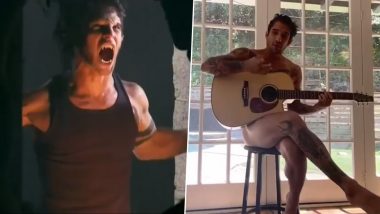 Ever since the whole buzz created by Tyler Posey's OnlyFans joining announcement, his fans have been siked. They want more and more content from their favourite star who is now ruling the XXX platform amongst the males. Recently on a video Q&A, he uploaded to his OnlyFans account the Teen Wolf star spoke candidly about his sex life and his sexuality. He has been grabbing headlines ever since after he shared bits about his encounters with other men. “I haven’t had sex with a man before. We’ve blown each other, you know what I mean? But never had sex. So, yes, I have been with men before.”

Talking about sex parties he said, “ they had holy water, which was shots with molly in it, and mushroom chocolate. And I didn’t give a s**t at all,” he said. He went on to say, “People were hired to perform [at the party],” he added. “None of the people that I saw that attended — that were like guests — had sex, but I have been to other sex parties… I wasn’t part of the people who worked there, but I was doing it. But this was when I was kind of abusing stuff and myself.”

(The above story first appeared on LatestLY on Oct 21, 2020 06:05 PM IST. For more news and updates on politics, world, sports, entertainment and lifestyle, log on to our website latestly.com).