Passion is something that can make humans conquer the whole world yet destroy it too. Today I am known to people as ‘Sarpmitra Akash Jadhav’, maybe it was my childhood passion or dream or the poverty, which is a great problem for our country, that made me do what I do. Poverty is a thing that can make a person deal with danger and I guess that is how my story started. 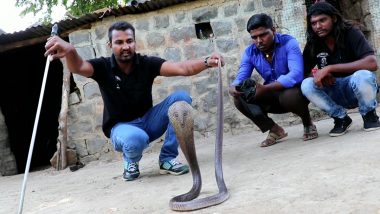 Passion is something that can make humans conquer the whole world yet destroy it too. Today I am known to people as ‘Sarpmitra Akash Jadhav’, maybe it was my childhood passion or dream or the poverty, which is a great problem for our country, that made me do what I do.  Poverty is a thing that can make a person deal with danger and I guess that is how my story started. I remember leaving school at an early stage when I was studying in 7th class because my family was facing a lot of financial trouble. I had to do something as I was not ready to accept the harsh reality of what life showed me at such a tender age.

Snakes are not good friends among Indian families even though lord Shiva wears one as an ornament. Like every other Indian family, my family was not supportive of my decision of getting trained for snake rescue, though after a great deal of discussion my father understood me. One of my relative Sunil Bhambal, he used work for an animal rescue organization at Satara, I contacted him and went there in 2007. It took me a year to learn about rescuing snakes and how to keep them safe. Within a year I had got to know about many species of snakes and the rescuing processes.

After a year in 2008, I returned to my native, Nagardev, a village which is located in Ahmednagar. The place is very rustic, mostly with thatched houses, water wells, and vast farmlands surrounding with forests nearby. I thought of starting a snake rescue team in my village because people here believed in superstitions and performed tantric rituals even after snake bites. People here had the belief that snakes can capture and remember a face, also the weirdest being snakes are immortal. People were unaware of the first aid on snake bites. Tantric rituals would end up with a mourning family always.

I initially started rescuing snakes and helping my neighbors, within a few days of my rescuing work, I started getting 5 to 6 calls a day. Rescuing a wild animal might look like an easy task on the internet but it takes hard work and smart work of hours. This is when I thought of expanding my team as I had to remain alert 24*7 and it was being hectic for me to attend every call alone. Atul Pakhare, Nawaz Shaikh, Rishikesh Jadhav, Shiraj Sayyed, Siddhant Waghchaure, Rishikesh Paredeshi, Aniket Pakhare were people who were trained in snake rescuing and they joined our team. I thank the heroes from the bottom of my heart.

But we could reach only Ahmednagar and not a wide range of people. I remember taking a loan to buy projectors so that I and my team can run campaigns at schools and colleges on how to provide first aid to a person who gets bitten by a snake, how to reach a safe distance from an attacking animal and reach us for help and not to believe superstitions and other guidelines to follow.

I started a YouTube channel named “Sarpamitra Akash Jadhav” in July 2017. I upload videos of my rescue work, first aid, and basic treatment for snake or animal bites to be done before reaching a doctor. People started following and accepting our work. I often describe the species that are being rescued. Not only snakes our teams have rescued various birds, foxes, jackals, and leopards also. To date, we have rescued more than 12000 species of wild animals. And I am very proud of my team.

These days we have started accepting women rescuers in our teams as a part of the women empowerment program. Megha Bhalerav, Neeta Gajare, Rajeshri Alhat, Sheetal kashar are a few female members of our team and we are extremely proud of them. As of today, we have 4.24 million followers on our Youtube page. Wildlife Rescue society is our registered NGO and we have been rescuing animals in Maharashtra for the last 13 years. Currently, we are serving from our office at Ahmednagar and looking forward to helping you anytime you need us.