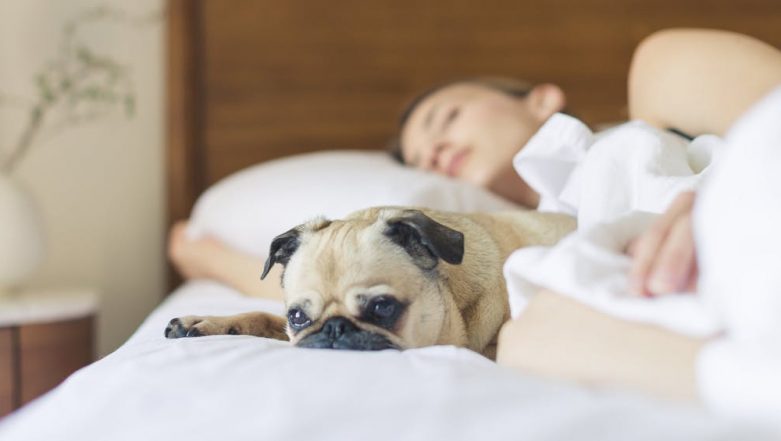 Dog-owners, especially the women folk, a research has confirmed your comfort of sleeping next to a dog. Pet owners usually would enjoy cuddling next to their dogs or cats, but would it be more comfortable than being with your partner? Well, yes it is according to a newly published study. Researchers from Canisius College in Buffalo, New York explored the impact of sleeping next to pets over humans. Their findings reveal that women sleep better next to dog than they do with a human. The study says that dogs would not disrupt the sleep as much as a human partner would. Bus Driver in Chile Allowed a Stray Dog to Ride in Bus Because it Was Cold, Watch Heart-warming Video!

For the study, 962 women in the US were interviewed for their sleeping habits. Out of these, 55% of the women said they shared the bed with a dog while 31% of the women shared the bed with at least one cat. In addition to this, 57% of the respondents slept with a human partner next to them. In conclusion, cats and humans were found to be more disruptive in their sleep. Dogs are least likely to wake them up in the middle of the night and also provide more security. Dog owners went to bed early and woke up earlier than those who have cats. Dogs or Cats? Know Who is Smarter and Why According to Scientific Backing!

The researchers were quoted, "Dog ownership and its associated responsibilities may cause individuals to adhere to a stricter routine. Keeping to a consistent sleep schedule may be beneficial to dog owners." A similar study was also connected in Arizona which stated that both men and women slept more peacefully with a dog for company in the bedroom. Well, aren't dogs the best? If you aren't used to cuddling with your pooch often, then this a good reason you should just take them on your bed and have a peaceful sleep.