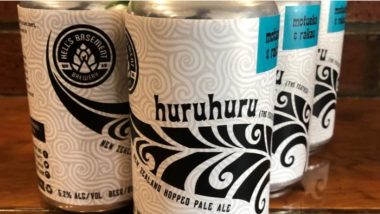 An Alberta brewery in Canada has apologised for unknowingly naming their beer 'pubic hair'. 'Huruhuru' in Maori means 'pubic hair' but not knowing it the brewery had named it so. Hell's Basement Brewery released 'Huruhuru' (The Feather) New Zealand Hopped Pale Ale two years ago. While they thought the word only meant feather, they recently understood the Maori meaning of it. Apologising for their mistake, the brewery's founder took to social media platforms saying that the product would now be rebranded. The brewery is based in Medicine Hat, Alta. Iceberg Beer: This Beverage From Newfoundland is Made With Water Harvested From Melted Glaciers.

It was Maori TV personality Te Hamua Nikora who pointed out the common interpretation of the word in a Facebook video. Mike Patriquin told Canadian network CBC, "We acknowledge that we did not consider the commonplace use of the term huruhuru as a reference to pubic hair, and that consultation with a Maori representative would have been a better reference than online dictionaries." Meaning of 'Bhosadike' in Sanskrit Shows 'Sir, Are You Well?' Is The Viral WhatsApp Message True or Hoax?

When Huruhuru Was Launched in 2018:

Huruhuru has been unleashed throughout Alberta. Have you said hello to our little friend? It's the perfect summer beer, light body with a subtle citrus flavour from the New Zealand Hops! Find one in the wild or in Alberta's liquor stores and pubs!#Hellomylittlefriend #Craftbeer pic.twitter.com/818DC4Mdrw

Hamua also criticised a leather store in New Zealand for using the name Huruhuru and said he had contacted both the store and brewery over their use of the word. A spokesperson for the New Zealand leather store said that they did not mean to offend but only meant wool, or feather or fur.

The founder of the brewery in the video added, "We acknowledge that we did not consider the commonplace use of the term huruhuru as a reference to pubic hair, and that consultation with a Maori representative would have been a better reference than online dictionaries. We wish to make especially clear that it was not our intent to infringe upon, appropriate, or offend the Maori culture or people in any way; to those who feel disrespected, we apologize." Patriquin said the brewery will rebrand the product and attempt come up with a better product in the future.

(The above story first appeared on LatestLY on Aug 09, 2020 12:43 PM IST. For more news and updates on politics, world, sports, entertainment and lifestyle, log on to our website latestly.com).