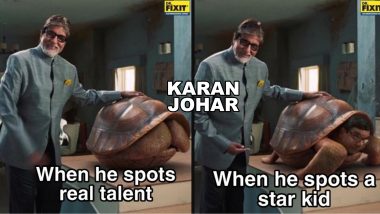 Twitter is not the best of place to be. People can be really, really mean, nasty, and downright disgusting. But at the same time, this dark place provides us with some of the dankest memes on the internet! Memes are life, and the person who is breathing life into the meme's world is none other than Mr Amitabh Bachchan. Of course, not intentionally, or did he? Gamora Memes Take Over the Internet Amid Avengers Endgame Fever; Video of Zoe Saldana Putting Green Lipstick Goes Viral.

One of his recently aired television commercials (TVCs) shows Amitabh Bachchan standing near a giant tortoise with a human head. Now, this sequence has caught the eye of vella netizens who just cannot have enough of making dank memes. They are using two stills, one in which human-tortoise hides his head inside the shell and other when the head is outside. Twitterati is having a field day using these pics to take digs at personalities such as Karan Johar, Virat Kohli, Rohit Sharma and even the mighty intergalactic Mad Titan Thanos! Go ahead check out some of the funniest memes that will leave you ROFLing!

Karan Johar Has Become The Ultimate Poster Boy of Nepotism!

Pic 1: when I assign work to my subordinates

Pic 2 : when it's salary day. pic.twitter.com/qJj2JzBKcJ

So Many Of You Could Relate To This One

Pic 1 : Relatives rest of of the year

Pic 2 : Relatives when your exam result comes out pic.twitter.com/8VceeDO35o

Pic 1: Kohli when asked to play for RCB

Pic 2: Kohli when asked to play for India pic.twitter.com/cEiJsHP6Tv

Pic 1 : #Thanos When asked to play with Shaktiman

Pic 2 : Thanos when asked to play with #Avengers pic.twitter.com/vaQdTPyrHA

Thanos Was Killed By Tinde Ki Sabzi in Parallel World

Earlier, megastar Amitabh Bachchan called the social media is the modern generation atomic bomb as users can easily voice their opinions and have the capability to give a perspective to any move be it political or otherwise. On the Bollywood front, Amitabh will next be seen in Ayan Mukerji's upcoming directorial Brahmastra. The film also stars Ranbir Kapoor and Alia Bhatt. (Inputs From IANS).

(The above story first appeared on LatestLY on May 04, 2019 10:09 PM IST. For more news and updates on politics, world, sports, entertainment and lifestyle, log on to our website latestly.com).