Anti-LGBT politician Petras Grazulis was seen on camera with a semi-naked man standing behind him during a Zoom call. The video which has now gone viral shows a document on the screen then during a meeting and then shows Lithuanian MP Petras Grazulis's webcam. Only his head can be seen while a topless man looks over his shoulder to the screen. 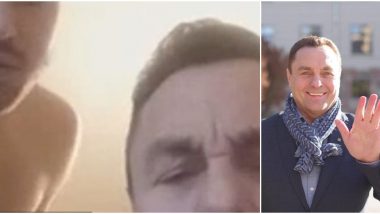 Anti-LGBT politician Petras Grazulis was seen on camera with a semi-naked man standing behind him during a Zoom call. The video which has now gone viral on social media platforms shows a document on the screen then during a meeting and then shows Lithuanian MP Petras Grazulis's webcam. Only his head can be seen while a topless man looks over his shoulder to the screen. As the video went viral, a parliamentary chairman suggested the man was likely to be a relative who was helping the MP with the computer. This is not the first time an anti-gay politician came under the radar for his actions that did not suit his viewpoints. József Szájer, an anti-gay politician and a member of the European Parliament, representing the Hungarian Prime Minister, Viktor Orban’s Fidesz party resigned from his position after he was caught attending a sex party.

Grazulis was attending an official meeting from home, when the incident occurred. The men could be seen looking at the screen for some time and then the on-screen document appears. Following which some noise is heard in the background. Reportedly, the Zoom meeting was broadcast live on the parliament's website. In the meaning, during the COVID-19 pandemic induced lockdown, there have been a number of instances in work from home online meetings when people were left red-faced due to blunders.

Grazulis is known for participating in anti-LGBT rallies. As the video spread, local media was quick to point out a potential irony of the MP with anti-LGBT views seen standing next to a man with a bare chest. Chairman of the parliamentary committee Vytautas Juozapaitis, who was also on the Zoom call was quoted as saying, "It's probably the responsibility of every member of parliament to ensure that no other people appear in their home environment. It's a question of why are they half-naked during working hours. Of course, you could say it's a person's private life, but he is connected to a Seimas (parliament) meeting." Glossary of Terms Associated With the LGBTQ Community.

Grazulis's Zoom call came shortly after Hungarian prime minister Viktor Orban condemned the 'unacceptable and indefensible' behaviour of an anti-LGBT MEP after he was caught breaking lockdown rules at a male orgy in Brussels. According to the local news, Grazulis reacted angrily when questioned on the incident. He said that the man was his son who was helping him with a computer issue. He later changed his claim and said that it was Andrius Tapinas, a journalist who he claimed had been 'persecuting him for a long time'. However, the man in the video does not resemble the journalist but Grazulis believes he changed his appearance to appear in it.

(The above story first appeared on LatestLY on Dec 07, 2020 12:44 PM IST. For more news and updates on politics, world, sports, entertainment and lifestyle, log on to our website latestly.com).