Bankim Chandra Chatterjee Death Anniversary 2022: Everything to Know About the Major Life Works of the 'Sahitya Samrat'!

Bankim Chandra Chatterjee was a notable man of literature and is also the man who wrote the National Song ' Vande Mataram. On his 128th Death Anniversary, read all about his literary career here! 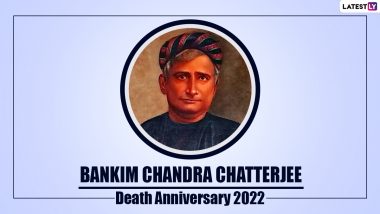 Bankim Chandra Chatterjee was an Indian novelist, Poet and Writer, widely known as the 'Sahitya Samrat'. He was a renowned Author writing majorly in the Bengali language which was then translated into many languages. He passed away on April 8, 1894, at the age of 56. Rabindranath Tagore Death Anniversary: 5 Women Characters of Tagore That Proved He Was a Feminist.

He is most known for creating the Nation song "Vande Mataram", which was actually a part of his critically renowned Bengali novel  Anandamath.  Bankim Da as fondly known amongst the admirers of literature started off his career as a writer for verses then made the change to fiction penning over 13 novels. His literary works have always echoed themes of critical, satirical, scientific and seriocomic ideas. His mark in the Art and Literature world has been very significant and even said to influence the likes of  Rabindranath Tagore, Sarat Chandra Chattopadhyay and Surendranath Dutt. On the occasion of his Death Anniversary, let's celebrate his literary career and take a look at his major life work.

Bankim was one of the First Graduates of the University of Calcutta, who then was appointed as the Deputy Collector of Jessore and then promoted to Deputy Magistrate, he continued working in civil services until retiring in 1891. Some of his prominent works include Kapalkundala (1866), Mrinalini (1869), Vishbriksha (1873), Chandrasekhar (1877), Rajani (1877), Rajsimha (1881), and Devi Chaudhurani (1884).

He also started his own magazine Bangadarshan in April 1872 which mainly consisted of social ideas, humorous sketches and historical essays and religious and devotional articles. Padma Awards 2021: Prof Jaibhagwan Goyal Awarded Padma Shri for Contribution in the Field of Literature, and Education.

Literary Career and Most Notable Work

As a poet, he began his writing career. Then he moved on to fiction. His first Bengali romance, Durgeshnandini, was released in 1865.

Anand Math was Bankim Chandra Chatterjee's most famous novel (1882). The song 'Bande Mataram',  which was ultimately adopted as the national song, was included in Anand Math. He wrote over 13 novels that have been translated into every major regional language.

Chatterjee is considered to be one of the pioneering literary influences in Bengali literature and is crowned as the 'Sahitya Samrat' for his contributions to literature.

(The above story first appeared on LatestLY on Apr 08, 2022 08:41 AM IST. For more news and updates on politics, world, sports, entertainment and lifestyle, log on to our website latestly.com).