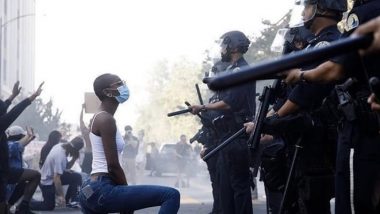 As the protest continued in the United States over the killing of 46-year-old George Floyd, photo of a young woman has gone viral on social media platforms. In the photo, she can be seen kneeling in front of gun-wielding police officers keeping her chin high. The photo has been widely shared with people calling her posture that shows her brave nature. Dressed in blue jeans, white strap top, sneakers and face mask, she looks at power straight in its face. The photo is widely shared on Twitter and social media platforms with people terming her as the face of the ongoing Black Lives Matter protest happening in different parts of the United States. It was clicked at San Jose city in California. Batman and Spider-Man Spotted at Black Lives Matter Protest! Videos of Protestors Dressed in Superhero Costumes Get All The Love Online.

In the meanwhile, the photograph of a woman by photographer Dai Sugano while protesters were still non-violent grabbed eyeballs of people. Sugano shared the picture with the caption, "A protester takes a knee during a #SanJose protest on Friday after #GeorgeFloyd’s death in #Minneapolis."  Twitter Supports Black Lives Matter! Changes Bio to #BlackLivesMatter and Logo to Black After George Floyd’s Death That Erupted Protests Across US.

Floyd, a 46-year-old Houston resident was handcuffed and pinned to the ground by a Minneapolis police officer Kellie Chauvin. A video of the incident went viral where Floyd can be heard telling the cop that he cannot breathe. But the Chauvin did not leave him and eventually died. The video erupted protests across America demanding justice. People began to call out racism in the United State and came out on the streets holding placards which read 'Black Lives Matter'. Chauvin was held with third-degree murder and four policemen have been fired. However, violent protesters burnt down public property and wreaked havoc in various places.

(The above story first appeared on LatestLY on May 31, 2020 08:23 PM IST. For more news and updates on politics, world, sports, entertainment and lifestyle, log on to our website latestly.com).