Boss Day 2019 Memes: Hilarious Jokes And Funny GIFs That You Can Even Share With Your Boss!

Boss Day is observed on October 16 every year in the US to thank and appreciate one's boss. While many shares messages of thankfulness and gratitude, others come up with Boss Day memes. And as we celebrate National Boss Day 2019, we have compiled a list of boss day memes, jokes and funny Boss GIFs. 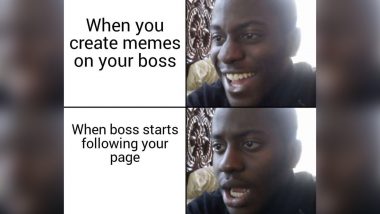 Boss Day is observed on October 16 every year in the United States to thank and appreciate one's boss. People greet their bosses with notes of gratitude and thankfulness. Boss' Day is also called as Bosses Day or Boss's Day. While the day was initially made to greet and thank bosses for their work, many are of the opinion that managers do not deserve a day of their own. While jokes on bosses have been present since time immemorial, with the new age, boss memes also started. While many shares messages of thankfulness and gratitude, others come up with Boss Day memes. And as we celebrate National Boss Day 2019, we have compiled a list of boss day memes, jokes and funny Boss GIFs you can also share with your boss. Boss Day 2019 Date: Significance And Origin of The National Boss's Day Meant to Thank Managers and Bosses.

The bond that an employee and a boss share is an important factor in the growth of a company. While this could be good for the company, the same can cause tensions and turmoils in the smooth functioning of an organisation. Corporate jokes aimed at bosses are quite a hit on social media and often gets shared widely. Jokes and memes on bosses differ from office to office and nobody understands your boss joke like your colleague. So, here is a list of hilarious jokes about offices which can tell your manager this National Boss Day. Share Funny Office Jokes and Memes With Colleagues & Workplace BFFs on WhatsApp.

The Struggle Is Real:

Let Everyone Have a Good Day :P

Only For Laughs, Do Not Apply in Real Life!

Boss: This is the third time you have been late for work this week. Do you know what that means?

Me: Yes! That today is Wednesday. pic.twitter.com/nklBe7J5W5

How I Laugh At My Boss' Jokes!

Trying Best to Hide My Despair:

Trying to laugh at my boss's jokes pic.twitter.com/fmkUr7VAly

Boss's Day was introduced in 1958 by Patricia Bays Haroski. She registered National Boss' Day with the United States Chamber of Commerce while working as a secretary for State Farm Insurance Company in Deerfield, Illinois for her father. She chose October 16 as Boss' Day as it was her father's birthday. She gave so much importance to the day as she felt that young employees fail to understand the efforts and challenges faced by bosses. Meanwhile, we wish every boss out there a 'Happy National Boss Day'.

(The above story first appeared on LatestLY on Oct 15, 2019 12:34 PM IST. For more news and updates on politics, world, sports, entertainment and lifestyle, log on to our website latestly.com).