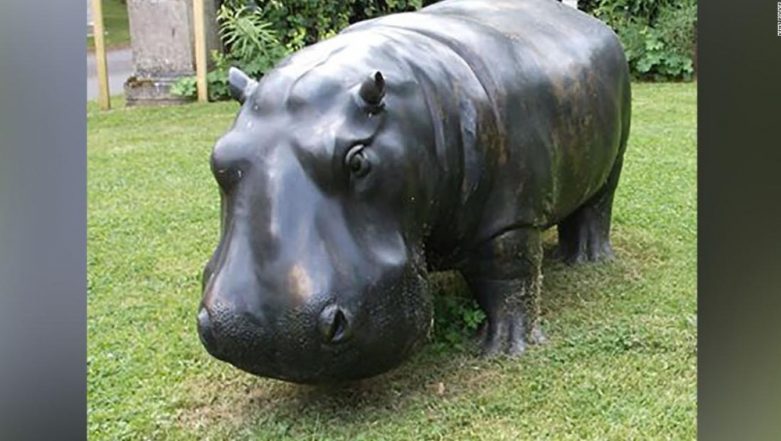 A bronze statue of a hippopotamus weighing 680 kg was stolen from a luxury show garden in Kent, England. The Kent police on Friday said that the 6.5-foot tall hippo is believed to have been stolen after someone forcefully entered the Chilstone Garden Ornaments in Tunbridge Wells. The police in a statement said that it is believed the theft took place between 5:30 pm on Wednesday and 7 am the following day. No other items were stolen, the police said.

Chilstone in a statement on their Facebook page said, "We are so sad that someone has stolen our beautiful sculpture. We love to show artwork as features in our garden and we are so disappointed that someone would take it. If you have any information please contact Kent Police. Thank you." Fourteen Precious Hindu Idols Stolen From Old Math in Bihar.

Founded in 1953, Chilstone provides handmade garden ornaments; their Facebook page states they have created "architectural stonework for some of the UK's most distinguished clientèle for over 60 years." They have listed Kensington Palace, Kew Gardens and the National Trust as customers.

Talking about the theft, Police Constable Nick Lingham in a statement said, "The hippo is extremely heavy and in the past, it has taken five people to lift it. It is clear those responsible would have needed a large vehicle such as a flatbed truck and may have also needed to lift it by mechanical means."

He added saying, "It is a hugely distinctive object and it is unlikely the offenders will find it that easy to sell on as scrap or to a collector. Because of its sheer size, we are hoping people may have seen it being transported and also asking members of the public to keep their eyes open and report anything suspicious."