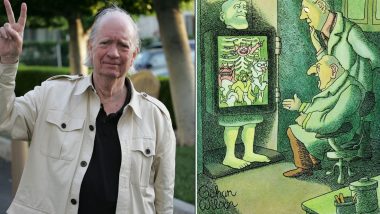 Gahan Wilson, the critically acclaimed cartoonist passed away at the age of 89. Known for his offbeat, the cartoonist will be remembered for his work in publications like The New Yorker, Collier and Playboy. His comic strip 'Nuts' was a regular feature in National Lampoon. Wilson is survived by his two stepsons, daughter-in-law, as well as eight grandchildren and three great-grandchildren. He is preceded in death by his wife, Nancy Winters Wilson. Born in Evanston, Illinois, on February 18, 1930, Gahan Wilson's horror-inspired cartoons and stories were a hit back then. He also created the comic strip 'Nuts' darker and 'Peanuts' which ran in National Lampoon magazine. After the cartoonist's death, people have taken to Twitter sharing his cartoons and artwork. Sudarsan Pattnaik Selected for Italian Golden Sand Art Award 2019.

A GoFundMe page was set up for Wilson’s medical care following. The page describes Wilson's wife as "his rock. His guide through the world. While we all helped with his care, it was my mother who grounded him. He is currently distraught and out of sorts with the world." According to the page, Wilson and his wife had been living in a medical care facility in Arizona together. Wilson married to author Nancy Winters from 1966 until her death on March 2, 2019. He was diagnosed with dementia.

RIP Gahan Wilson (1930-2019) cartoonist for The New Yorker, Playboy, National Lampoon, the Magazine of Science Fiction & Fantasy & much else. He did spooks, ghouls, & monsters better than anyone since Charles Addams. pic.twitter.com/eN7fD7di5K

RIP to Gahan Wilson one of my favorite artists of all time and one of my biggest creative inspirations. One of the most original minds in horror. pic.twitter.com/7BiXTxoLuE

A Comic Strip From Nuts!

So honored to have published the hilarious and horrifying work of the great Gahan Wilson. He'll be missed! pic.twitter.com/6HK2nQuZZl

RIP to Gahan Wilson. He was a great short story writer and a master of creating creepy little worlds in just one panel pic.twitter.com/zoLy4bpdEI

Defining What's Happening On The Inside!

The great cartoonist Gahan Wilson has died. He did a lot of work for Playboy, and while readers may not have bought the magazine “for the articles”, his cartoons were definitely a high point pic.twitter.com/nsTuYOtOSC

In 2009, Wilson illustrated an animated version of Neil Gaiman's 'It Was a Dark and Silly Night' ahead of a New Yorker for the magazine. The 2013 documentary Gahan Wilson: Born Dead, Still Weird included A-list cast of creators and media icons including Gaiman, Stan Lee, Guillermo del Toro, and Hugh Hefner who tried to explain how Wilson's artistry despite being dark and offbeat resonated with such a wide category of readers over the decades.

(The above story first appeared on LatestLY on Nov 23, 2019 01:16 PM IST. For more news and updates on politics, world, sports, entertainment and lifestyle, log on to our website latestly.com).