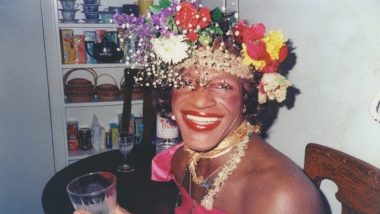 June is celebrated as Pride month across the world, recognising the LGBTQ+ community. Tech giant Google took the opportunity to celebrate American drag queen Marsha P Johnson who played an important role in impacting black gay and trans activists. She was a trans-right activist and is regarded as the pioneer of 1969 Stonewall Uprising. Her activism in the 1960s and 70's had a huge impact on the LGBTQ+ community at a time when being gay was classified as a mental illness in the United States. On this day in 2019, Marsha was posthumously honoured as a grand marshal of the New York City Pride March. As we celebrate her legacy, we bring to you some interesting facts about the person who inspired people to stand up for their rights. Marsha P. Johnson Google Doodle Celebrates The LGBTQ+ Activist During Pride Month With Colours of the Rainbow.

As her death created a controversy, a Netflix documentary was made on it by David France, The Death and Life of Marsha P. Johnson. She was engaged in cross-dressing behaviour at an early age and wad often reprimanded for it. Following graduating from high school, she moved to New York where she struggled to make ends meet. Thereafter she became a part of the nightlife of Christopher Street, designed her own clothes and helped other LGBTQ youth. There is no better time to celebrate Marshat than during Pride month.

(The above story first appeared on LatestLY on Jun 30, 2020 10:20 AM IST. For more news and updates on politics, world, sports, entertainment and lifestyle, log on to our website latestly.com).