Scary images of the carcasses of the dolphins were seen lying on a beach after being pulled from the blood-stained water on the island of Eysturoy on Sunday. The government of the Faroe Islands faced an outcry over the culling of 1,428 dolphins in a day. 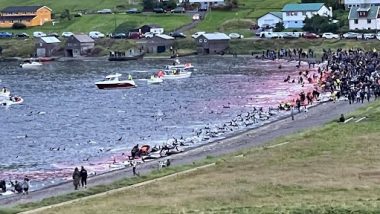 Copenhagen, September 16: Over 1,400 white-sided dolphins were killed on Sunday night in the Faroe Islands, raising concerns of the protection of these mammals in the region. Reports inform that the dolphins were killed in what local authorities said was a traditional whaling hunt. Horrific images of the carcasses of the dolphins surfaced on social media lying dead on a beach after being pulled from the blood-stained water on the island of Eysturoy. The government of the Faroe Islands faced an outcry over the culling of 1,428 dolphins in a day.

The cruel and inhumane incident prompted animal rights groups to speak up about the barbaric incident. The Faroe Islands is a self-governing archipelago, part of the Kingdom of Denmark between Norway and Iceland in the Atlantic Ocean. It comprises 18 rocky, volcanic islands between Iceland and Norway in the North Atlantic Ocean, which is connected by road tunnels, ferries, causeways and bridges. Dolphins Spotted Splashing in Water off Vashi Creek Near Mumbai! Watch Rare Video of Mammals Going Viral.

Netizens and animal conservationists react to the barbaric incident:

A huge pod of white-sided dolphins have been brutally slaughtered in the Faroe Islands this evening.

This IS one of the most barbaric actions ever. Each year on the Faroe Islands(Denmark), 1500 or so innocent dolphins are slaughtered. Tradition my ass! Murder, yes. pic.twitter.com/oWJWuj0RiT

I'm not a big traveller, but I can guarantee you, I'll never visit the Faroe Islands... Just because a disgusting and bloody mass slaughter of gentle & intelligent Dolphins is 'tradition' does not make it right.

Just imagine the distress these gorgeous creatures went through..💔

1428 dolphins was brutally slaughtered or beat to death yesterday in the Faroe Islands. 😡😡#Tiredearth #ocean pic.twitter.com/lZVVCH45db

#Denmark The Faroe Islands, Denmark's overseas autonomous territory, held a hunting activity on the 12th. More than 1400 white edge dolphins were killed, and the whole Gulf flowed with blood, triggering the anger and condemnation of animal conservationists. pic.twitter.com/fVJDbsZTA1

The culling of the dolphins sparked outrage and drew sharp criticism from animal rights activists. The images and videos from the event showed water and shoreline turning red with the blood of dead dolphins. Marine conservation group Sea Shepherd denounced the killing of the dolphins terming it as a "brutal and badly mishandled" massacre, and the largest single hunt in the Danish territory's history. The group added that several of those involved did not have the required licenses to participate. Mumbai: Dead Dolphin Washes Ashore Juhu Beach.

The annual whale hunt in the island has been a part of local culture for centuries. However, it usually involves the hunting of pilot whales. The practice has long been criticized by animal rights groups, locals have defended the practice. A  government spokesman told AFP that there is no doubt that the Faroese whale hunts are a dramatic sight to people unfamiliar to the hunts and slaughter of mammals. "Traditionally, the North Atlantic islands -- which have a population of around 50,000 people -- hunt pilot whales and not dolphins", the spokesman said.

(The above story first appeared on LatestLY on Sep 16, 2021 03:56 PM IST. For more news and updates on politics, world, sports, entertainment and lifestyle, log on to our website latestly.com).