#DurexInvisible funny memes and jokes take over Twitter, as netizens thank the condom brand for introducing the thinnest condoms. Happy Tweeple now talks about safe sex and pleasure, in the form of hilarious posts on social media. 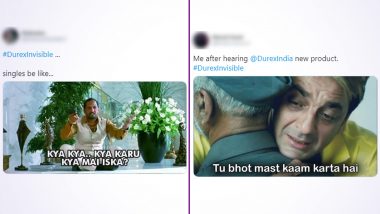 Durex India has garnered quite a buzz on social media. After the company introduced the hashtag #ForgetCondoms, people were left bewildered behind the brand’s motive. Netizens could stop but wonder why #ForgetCondoms of anything else. Durex even boarded social media influencers and actors to talk about its latest initiative. The viral hashtag sure inspired funny memes and jokes, as people went crazy over it. Today, morning, the condom brand finally unveiled the reason behind the viral hashtag. Well, it was its marketing tactic to create online engagement for its latest product, Durex Invisible, the company claims it to be India’s thinnest condom. Soon after its launch, #DurexInvisible funny memes and jokes take over Twitter, as netizens thank the condom brand for introducing the thinnest condoms. Happy Tweeple now talks about safe sex and pleasure, in the form of hilarious posts on social media.

Why the thinnest condom? According to Durex India’s global sex survey in 2017, the company found out that the number one reason why people avoid using condoms is reduced enjoyment during sex. The brand’s initiative on “I want to #ForgetCondoms because,” also received numerous responses from users displaying their thoughts on why they wanted to forget condoms. Its ad for Durex Invisible condoms received quite a response on social media.

And now #DurexInvisible is trending on Twitter. It is good to see how people on the internet are talking about safe sex and pleasure at the same time on the internet. Netizens seem to love Durex’s marketing gimmick and its latest product as they all give it a thumbs up with funny memes and jokes. While singles may not be as happy as couples, Durex India’s latest brand is appreciated well on the internet.

After your done when she asks 'Pehna tha na?"

Everyone is eagerly waiting for #durexinvisible

Now it's more comfortable so must use it guys#DurexInvisible pic.twitter.com/ppZWZzkw59

Can't You See Me

You can't see it, but you can feel the pleasure 😌 #DurexInvisible pic.twitter.com/j1pQ2E6eqs

As we said, it is fun to see people talking about safe sex on social media, especially in a country, where all of it is still regarded as a taboo. And we must give credit to Durex India for its accurate marketing strategy to engage users online related to safe sex.

(The above story first appeared on LatestLY on Oct 20, 2020 06:07 PM IST. For more news and updates on politics, world, sports, entertainment and lifestyle, log on to our website latestly.com).