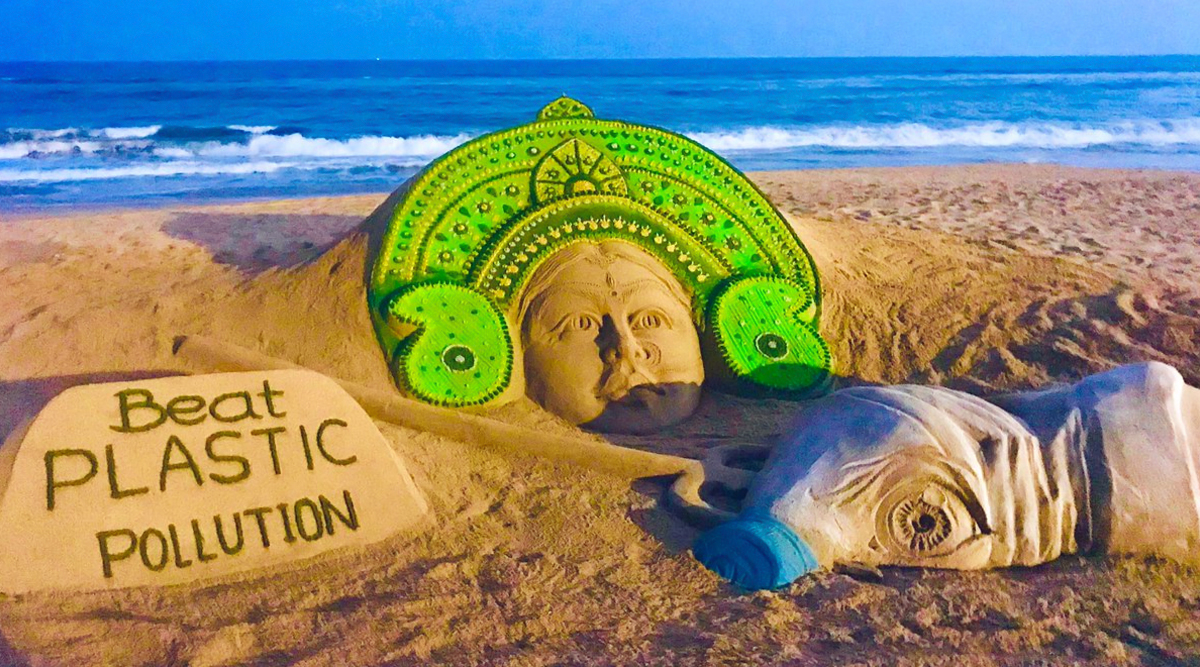 Popular sand artist Sudarsan Pattnaik has created a sand art on the occasion of Durgashtami with a message on beating plastic pollution. Extending Mahishasur Mardini wishes he shared a photo of a green coloured Maa Durga sand art he created at Puri beach in Odisha. The sand art is accompanied by a message to reducing the use of plastic which is a big threat to the environment. The sand art portrays a crushed plastic bottle as a demon, referring to Mahishasura who was killed by Maa Durga on Durgashtami. He shared the picture saying that plastic is the new age demon we need to get rid of. Alongside the Maa Durga sand art is a message which reads 'Beat Plastic Pollution'. Subho Maha Saptami 2019 Greetings Image: This Beautiful Sand Art of Maa Durga by Sudarsan Pattnaik is Perfect to Share as WhatsApp Message With Family and Friends!

Sudarsan Pattnaik posted a photo of the sand art with the caption, "Plastic is today’s Mahishasur. This Puja Goddess #Durga appear in green to kill the Mahishasur demon. My sand art with a message beat demon #PlasticPollution at puri beach. (sic)" Plastic pollution is one of the major issues which has affected the Planet Earth. Today, plastic waste has clogged water bodies, killed animals and is a major threat to marine life.

Plastic is today’s Mahishasur. This Puja Goddess #Durga appear in green to kill the Mahishasur demon. My sand art with a message beat demon #PlasticPollution at puri beach. pic.twitter.com/OWFYgaHgMm

According Hindu legend Goddess Durga defeated Mahishasura after fighting for a period of fifteen days. She took a new form trying to kill the demon as he kept changing his shape to become a different animal. She finally beheaded him when he transformed into a buffalo. Maa Durga stabbed him with her trident and killed him on the day of Mahalaya.