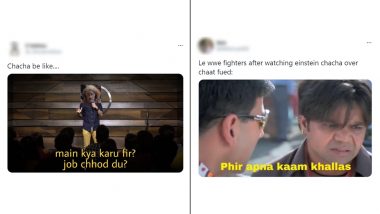 Social media is never complete without some hilarious range of memes and jokes. Most of the incidents or events are compared well with funny reactions that no one saw coming. In the past days, we have seen ‘Shweta Mic On Hai,’ memes after a hilarious zoom fail that went viral on social media. But of course, one cannot EVER be bored with ‘Pawri Hori Hai’ meme templates that continues to rule the internet. It appears that netizens found just another source of memes, and he is from the brawl video that went viral yesterday, February 22, 2021. Popular ‘Einstein Chacha’ funny memes and jokes are everywhere RN, and they are raw gold. Desi tweeple can’t stop making hilarious reactions of the multi-coloured hair elderly man from the clip of chaat sellers’ fight in Uttar Pradesh.

Two groups, armed with iron rods and sticks, brutally beat each other up on the road in visuals that have emerged from UP’s Baghpat. According to reports, the fight broke out between shopkeepers and workers of two chat stalls in the district’s Baraut town over getting customers to their shops.

The bizarre fight went viral on social media, and there, netizens found the older man whose multi-coloured hairstyle and fighting spirit is legit meme gold.Netizens dubbed the video as desi WWE, and the elderly man is now famous on the internet as ‘Einstein Chacha.’ Why Einstein? Well, netizens are impressed with his hairstyle, and his hairstyle literally will remind you of the great physicist Albert Einstein. He even moved the iconic rock bottom in his own style, and netizens are totally electrified. The hilarious reactions of ‘Einstein Chacha,’ funny memes and jokes are here to make you go ROFL.

Best part is the fighting spirit of the chacha pic.twitter.com/zds2L9L55J

I was hoping to go to Germany (land of Einstein)

But I found einstein chacha in my town ... pic.twitter.com/6CxTkVa9bW

This ChaCha will rule Meme world for very long Time

Specially when I compare this with Einstein or Any WWE Fighter ‼️‼️ pic.twitter.com/2lWSDv8lnS

Who Did It Better?

Who did it better?

Same to Same 🤡 No difference pic.twitter.com/kvmpK0k199

Then: Shweta Left her Mic on

How it's started. How it's ended pic.twitter.com/8A6wZpgKsw

When teacher When she's

leaves class back after 5min pic.twitter.com/dJSeRDwbjl

The fight though bizarre, left some of the people involved in it injured. About 12 have been injured in the clash, and so far, eight are reportedly arrested, and one of them is our very own, ‘Einstein Chacha.’ He is surely ruling the meme world!

(The above story first appeared on LatestLY on Feb 23, 2021 11:08 AM IST. For more news and updates on politics, world, sports, entertainment and lifestyle, log on to our website latestly.com).