Netizens are falling prey to a satirical website that claims that CNN is praising the Taliban for wearing face masks during attacks and are showing all of us the proper way to behave during the COVID-19 pandemic. 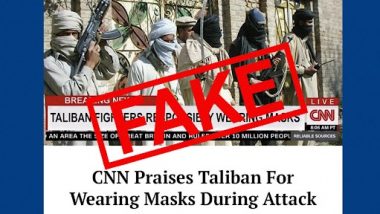 Kabul, August 16: The situation in Afghanistan worsened further after the Taliban took over Kabul on Sunday. Amid the ongoing crisis, several posts, images and videos are doing rounds on social media platforms claiming them to be that of actual situation in the country at present. In a latest such case, netizens are falling prey to an article on a satire website that claims that CNN is praising the Taliban for wearing face masks during attacks and are showing all of us the proper way to behave during the COVID-19 pandemic.

The satire website named babylonbee.com shared an article claiming that CNN has praised the Taliban for wearing face masks and keeping the COVID-19 infection at bay. After the article surfaced online, netizens believed it to be true! The article further states that the CNN anchors praised the Taliban fighters after noticing that all of them were responsibly wearing masks to protect themselves and others from COVID-19 pandemic. Afghanistan Crisis: All We Know So Far.

It must be noted that the website is a satire website that uses humour, pun, irony, exaggeration in the articles to attract readers. The claim that CNN is praising the Taliban for wearing face masks during attacks is therefore not true.

The article further goes on to say that inspired by their example, the Biden Administration has invited the Taliban to the White House to record TikTok videos in hopes of convincing Trump supporters to get vaccinated. Funny, isn't it?

People of Afghanistan were seen fleeing from the country to save their lives after the Taliban captured Kabul and some other major cities. Scores of people were seen try to leave the country and hustling at the Kabul international airport. The Taliban has declared that the war in Afghanistan is over after its fighters swept into the capital, Kabul, and President Ashraf Ghani fled the country on Sunday. The UN Security Council will discuss the situation in Afghanistan later on Monday.

The claims are fake as it is a satirical website.

(The above story first appeared on LatestLY on Aug 16, 2021 02:25 PM IST. For more news and updates on politics, world, sports, entertainment and lifestyle, log on to our website latestly.com).