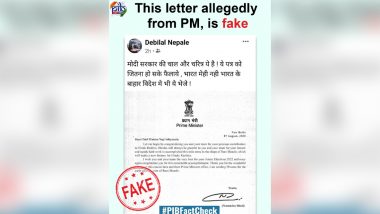 New Delhi, August 9: The Press Information Bureau (PIB), the government's official media arm, was compelled to issue a note of clarification after the image of a fake letter from Prime Minister Narendra Modi to Uttar Pradesh Chief Minister Yogi Adityanath went viral. In the letter which was confirmed as "fake" by the PIB, it was stated that Modi would send Rs 50 crore to the UP government for early construction of the Ram temple.

The fake letter further quoted the Prime Minister as lauding Adityanath for striving towards the "Hindu Rashtra" agenda, and also wished him the best for the 2022 assembly elections. FIR Lodged by UP Police Over Recorded Messages Asking Muslims to Stop PM Modi From Unfurling Indian Flag on August 15.

The fake news peddlers apparently attempted to stoke communal tensions, as their designed letter quoted Modi as saying that Hindus would be grateful to the Adityanath government for the efforts taken so far in his tenure.

After the letter began going viral on Facebook, the PIB Fact Check handle on social media took cognisance and issued a clarification. It was categorically noted that no such letter was issued to the Uttar Pradesh CM by the Prime Minister's Office (PMO).

Claim: A Facebook user, has posted a letter, allegedly written by PM @narendramodi to Chief Minister of #UttarPradesh @myogiadityanath#PIBFactCheck: This letter is #Fake pic.twitter.com/9dHdcEEMu4

The fake letter was circulated amid the transmission of audio recordings on WhatsApp, asking Indian Muslims to prevent PM Modi from hurling the national flag at tricolour on the occasion of Independence Day 2020. LatestLY appealed to readers to exercise caution and refrain from forwarding news received via social media without verifying the same.

Fake news. No such letter was issued from the PMO, clarified the PIB.

(The above story first appeared on LatestLY on Aug 09, 2020 09:34 PM IST. For more news and updates on politics, world, sports, entertainment and lifestyle, log on to our website latestly.com).