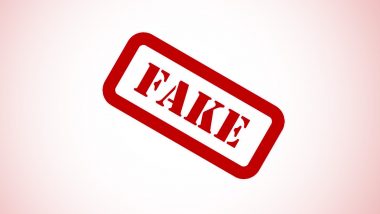 Darbhanga, July 5: Recently, several posts on social media claimed that the 15-year-old girl, Jyoti Paswan, who travelled from New Delhi to Darbhanga on a bicycle carrying her injured father, was raped and murdered by an ex-army man. A graphic image of a girl is also being circulated along with the viral post. Some verified Facebook users also shared the post. However, the claim made by some social media users is fake.

The "cycle girl" has not been raped, and she is healthy and fine. According to a report published in The Time of India, another girl by the same name was found murdered in Darbhanga. The dead body of the 13-year-old girl named Jyoti Kumar was recovered from compound of former army man’s home. 15-Year-Old Girl Carries Injured Father on Bicycle From Gurugram to Bihar, Covers a Distance of 1200 km Amid Lockdown.

Remember the cycle girl of Bihar. Travelled 1500 km with his father.

Jyoti brutallly got raped and killed, no media is showing up. I want , we all want #JusticeForJyoti

Cycle girl , Jyoti who carried her wounded father to their home village on the back of her bicycle covering 1.5k/km during lockdown was raped by a gangster, Arjun Mishra.

Women’s are not toys of lustful dogs..!

The army man and his wife were arrested in connection with the case. Reports claimed that the girl died to electrocution and the postmortem report also ruled out the possibility of rape. The media house also get in touch with ‘cycle girl’ via WhatsApp to know the truth. Cycle Girl Jyoti Kumari from Darbhanga Uses Reward Money to Help Poor Aunt (Bua) Get Married .

In May this year, she carried her injured father on a bicycle, covering a distance of 1200 km from Gurugram to Bihar amid the lockdown. The duo started their journey on May 10 from Delhi after they purchased a bicycle. They reached Bihar on May 19, a day after the phase four of the lockdown was started. Last month, Jyoti also earned praises after she used her reward money to get her aunt (bua) tie the knot.

The "Cycle Girl" was not rapoed and murdered by ex-armyman. A dead body of a girl by same name was found at the ex-army-man's home. However, the post-mortem report ruled out possibility of rape.

(The above story first appeared on LatestLY on Jul 05, 2020 08:47 PM IST. For more news and updates on politics, world, sports, entertainment and lifestyle, log on to our website latestly.com).