Remdesivir Being Sold by the Name ‘COVIPRI’ Is Fake News! PIB Fact Check Warns People Not To Buy Medical Supplies From Unverified Sources 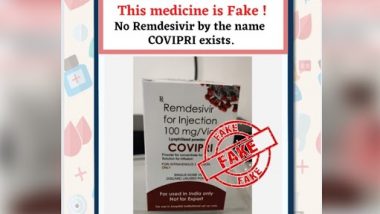 Remdesivir injections are being sold at exorbitant rates as the drug is currently in high demand for the treatment of COVID-19 patients. The fake post shows an image of 'Covipri' packets, with Remdesivir injection written on them. Similar posts saying Covipri is in circulation were also shared on Facebook by many users. Dismissing the fake claims, a fact check by Press Information Bureau (PIB) said that the vial named COVIPRI is fake. It alerted people on such fake information and urged them not to buy medical supplies from unverified sources. People have also been asked to beware of counterfeit medicines and injections. COVID-19 Virus Can Be Killed by Pouring Lemon Juice in Nose? PIB Fact Check Reveals Truth Behind Fake Video Going Viral on Social Media.

A vial for #Remdesivir injection by the name 'COVIPRI' is in circulation.#PIBFactCheck

This vial by the name #COVIPRI is #Fake. Do not buy medical supplies from unverified sources and beware of counterfeit medicines and injections. pic.twitter.com/TM5PS6sbcR

The viral image of “Covipri” circulated on social media raises questions on the authenticity of the drug. Ever since the outbreak of the COVID-19 pandemic, fake news regarding the treatment of the infection are being widely circulated on social media platforms, leading to confusion among people. COVID-19 Can Be Cured at Home Using Black Pepper, Ginger and Honey? Viral News Claiming Pondicherry University Student Has Found Home Remedy for Coronavirus Is Fake.

The government and its various agencies have time and again cautioned the people to not fall such fake claims and misinformation. It has also advised the citizens to follow and verify any information from the official releases by the government.

A vial for Remdesivir injection by the name \'COVIPRI\' is in circulation.

This vial by the name COVIPRI is Fake. Do not buy medical supplies from unverified sources and beware of counterfeit medicines and injections.

(The above story first appeared on LatestLY on May 03, 2021 05:47 PM IST. For more news and updates on politics, world, sports, entertainment and lifestyle, log on to our website latestly.com).