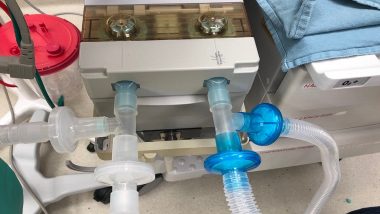 New Delhi, June 24: The government on Wednesday refuted a report that it had not procured sub-standard ventilators for the treatment of critically ill COVID-19 patients. Responding to Huffpost's report, the Centre said that ventilators were approved by the technical committee after following due process. It added that they were acquired only after carrying out successful clinical trials.

The Press Information Bureau (PIB) tweeted, “Claim: Govt is procuring sub-standard ventilators. #PIBFactcheck: The Ventilators have been approved by the technical committee after following due process. Successful clinical trials have also been carried out.” Google Rolls Out Fact-Check Label Under Thumbnail Image Results.

Claim: Govt is procuring sub-standard ventilators.#PIBFactcheck: The Ventilators have been approved by the technical committee after following due process. Successful clinical trials have also been carried out. pic.twitter.com/arI4Eweto2

Earlier in the day, US-based new aggregator HuffPost reported that two government-appointed committees raised concerns about the capability of 10,000 low-cost ventilators. The ventilators were ordered by the Modi government amid coronavirus pandemic from Indian startup AgVa Healthcare.

According to the media house, in the clinical evaluation dated June 1, 2020, a committee of doctors said that the Modi government could buy these ventilators manufactured by Indian startup AgVa Healthcare, but these should be considered as a replacement to high-end ventilators.

The order for these ventilators was placed on March 27 and were brought under PM-CARES fund. Defence PSU Bharat Electronics Limited is producing 30,000 ventilators in collaboration of another Indian company Skanray Technologies

(The above story first appeared on LatestLY on Jun 24, 2020 06:17 PM IST. For more news and updates on politics, world, sports, entertainment and lifestyle, log on to our website latestly.com).