A woman named Ashley Lawrence stuck her head into the reptile's mouth here for a whole of six minutes and wasn't even hurt. The incident was recorded at Freestyle Alligator Wrestling Competition in Brighton. 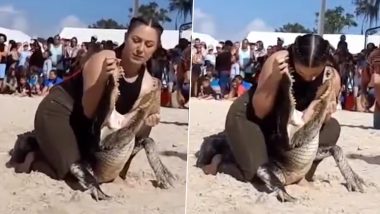 Florida is often in news for some bizarre stories and instances. Now, there's another video from the place which shows a woman putting her head inside an alligator's mouth! Why? Well, it wasn't her quirks but at an alligator wrestling competition which is just another of Florida's unique events. A woman named Ashley Lawrence stuck her head into the reptile's mouth here for a whole of six minutes and wasn't even hurt. The incident was recorded at Freestyle Alligator Wrestling Competition in Brighton. She showed off her skills to get the beastly alligator under control and then put her head right into its mouth! A video of her act has been shared online. Massive Alligator 'Fabio' Spotted Strolling Across in Florida Reserve, Watch Video.

It was an almost eight and a half foot long alligator, with its weight upto 90 kilos. Ashley Lawrence is from Miami and participated in this competition and put all her concentration to it. She admitted that she was feeling all the pressure and thought she would not be good enough. She explained in a report that she had to remind herself of her skills to calm her mind. Talking about pulling off the feat she said, "The part of this whole experience that had the biggest impact on me was the strength and love I was surrounded with from the community, from the spectators, from my own competitors. So many young women came up to share with me how my six minutes in the arena made them feel." Graduation Snap Ideas! This Girl in Texas Had an Alligator to Pose With, See Viral Pics!

Watch Video of Woman Sticking Her Head Inside Alligator's Mouth:

That's incredible! The techniques that she used were part of the training given in Seminole Tribe of Florida to safely capture alligators. She used the same knowledge to understand the powers of the alligator, its behaviour and movements. Also, the alligators from this competition were later let out in the wild.

(The above story first appeared on LatestLY on Mar 07, 2020 01:36 PM IST. For more news and updates on politics, world, sports, entertainment and lifestyle, log on to our website latestly.com).