The Goa government's resolve to make counselling of couples mandatory before marriage has triggered comic spin-offs on social media, with netizens wondering whether such counselling should also be made mandatory for legislators in the coastal state, who have a reputation for party hopping. 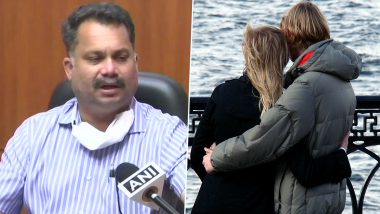 Panaji, June 1: The Goa government's resolve to make counselling of couples mandatory before marriage has triggered comic spin-offs on social media, with netizens wondering whether such counselling should also be made mandatory for legislators in the coastal state, who have a reputation for party hopping.

On Monday, Goa Law Minister Nilesh Cabral had said that his ministry was tinkering with a policy to make pre-marriage counselling mandatory to stem the rising tide of quick divorces in the state, even as he was unable to provide statistics related to registration of divorces in the state. According to Cabral a government agency was formulating a counselling module and that religious institutes could also be roped in to provide pre-marriage counselling sessions.  Goa Minister Mauvin Godinho Demands Apology, Says Palanivel Thiagarajan Has Insulted Goa And Smaller States

Ketan Bhatikar, a member of the Maharashtrawadi Gomantak Party said that instead of couples, such counselling should be first administered to ministers and ruling MLAs. "Start a pre ministry counselling within ur ministers and MLA(s) so that they don't keep fighting, threatening, each other," Bhatikar said.

Nigel Britto, a journalist, in a sarcastic comment said: "Who better to counsel people on marriage than a government/party loaded with turncoats who cheated on their voters the first chance they got?".

Since the 2017 assembly results were declared, 13 Congress MLAs have joined the BJP, so have two MLAs from the Maharashtrawadi Gomantak Party. The en masse switchovers had attracted severe criticism from civil society at large. Goa has a 40-member state legislative assembly.

According to another Facebook user Francisco Rosario, pre-election training of all candidates would help arrest the trend of defection, which has plagued Goa since the 1990s.

"How about starting pre-election training for all proposed candidates (so) that they know and understand aserving for the benefit of society' is their priority rather than aiming and implementing ideas which benefit themselves," Rosario says, while according to Nilesh Juwarkar, with the new pre-counselling module, "getting married and obtaining a car licence would be the same in Goa".

"Who is the political executive to explain concept of marriage to couples? Will the government tomorrow explain the concept of love, companionship, live-in? Is it not provided under the laws governing marriage, divorce, inheritance and succession?".

(The above story first appeared on LatestLY on Jun 01, 2021 05:01 PM IST. For more news and updates on politics, world, sports, entertainment and lifestyle, log on to our website latestly.com).