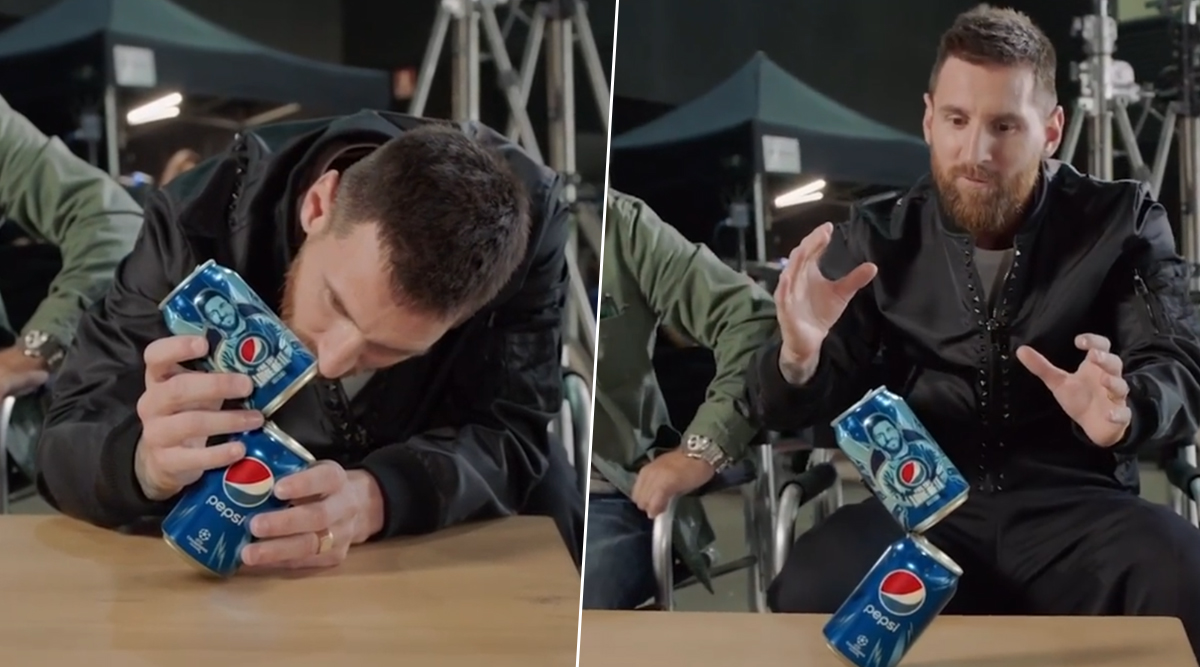 Superstar footballer Lionel Messi is experimenting some magic tricks in between advert shoots. Looking at his latest Instagram post, it seems he is inspired by rock balancing or stone balancing art. The Argentine footballer is attempting the Can Challenge and can be seen balancing empty Pepsi cans on one another. In what looks like the location of an ad shoot, he can be seen sitting on a chair with others. Soon he takes a Pepsi can, tilts it and places it on the table balancing on the edge. He takes another can which has his caricature on it and balances it on top of the can. And voila! It stands still quite naturally as if the empty can be meant for it. We are sure his fans are going to be super impressed making it another viral internet challenge. Lionel Messi Beats Cristiano Ronaldo to Top List of 100 Greatest Players of The 21st Century Compiled by Independent UK.

Lionel Messi shared the video on Instagram with the caption, "Es la hora de ir con todo. @PepsiFootball /// Time to step it up @PepsiFootball #PepsiCanBalance #ForTheLoveOfIt." Messi has attempted various tricks with Pepsi in the passed too. His amazing bottle flip challenge had gone viral in 2019 so much so that people even wondered it was real or not.

Meanwhile, the Argentine superstar has been speculated with a move away from FC Barcelona following his public row with club technical director and former teammate Eric Abidal. Messi, who joined the Catalan club at 13, has lifted four Champions League titles and a record 10 La Liga trophies with Barcelona while also becoming the first-ever to win six Ballon d’Or trophies. His current contract at Barcelona runs till 2021.