The Luna Fire in New Mexico is the latest to join, at extreme fire danger rating. It is currently burning at an elevation of 11,000 feet to 9,000 feet, as noted by media reports. Videos and photos have surfaced on social media that show how the Luna Fire have created devastating situation. 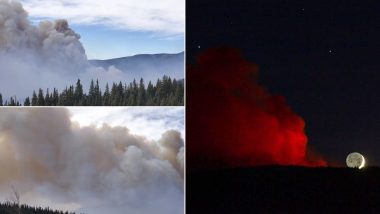 The United States of America is facing extreme weather condition. It is the fuel, the dry grass, the crispy leaves, the parched shrubbery and the dead trees caused by climate change’s shortened rainy season that is making 2020 fires season as one of the worst in the US history. Millions of hectares were burned reportedly in Washington state, Oregon, California, Arizona, Colorado, Idaho, Nevada, and Wyoming by mid-October. The Luna Fire in New Mexico is the latest to join, at extreme fire danger rating. It is currently burning at an elevation of 11,000 feet to 9,000 feet, as noted by media reports. Videos and photos have surfaced on social media that show how the Luna Fire have created devastating situation while the rescue and evacuation services are on. Hot, dry and breezy conditions stand as a challenge for the fire containment efforts by personal battling the Luna Fire.

Forest officials have reported that voluntary evacuations have occurred in the Luna Canyon Area, Black Canyon, Guadalupita and the area is set to a ready stage of evacuation. The officials further stated that despite it being late October, multiple fires larger than 1.5 square miles have cropped up in the last week, including the Luna Fire and the Horse Fire south of Prescott, Arizona. The Lincoln National Forest in New Mexico is burning too.

Images and videos have surfaced on social media displaying how the fire has created a devastating situation in the area. Forest and fire department officials are on the field to rescue and voluntarily evacuate residents. There has been zero percent containment, and various structures are threatened by the Luna Fire.

#HAPPENINGNOW: Residents in Luna Canyon on stand by for evacuations as #LunaFire continues to grow. @koat7news pic.twitter.com/hu5BRnf8cR

As we circled the fire, it changed dramatically, by the second. 10/18/2020 #LunaFire #newmexico #fitifiti pic.twitter.com/8P6zdFc4JE

My friend Bonnie took this pic of the fire .. from Blacklake #LunaFire pic.twitter.com/yb6MHW08xJ

Pics of the #LunaFire 🔥 from

The Fire is Only Growing!

KOB4: RT @RyanLaughlinKOB: The #LunaFire is now over 10,000 acres burned and growing. We're headed there and will have a full report tonight after #snfonnbc @KOB4. Thanks to Mike Snow for the pics near Mora. pic.twitter.com/VcFwlLu1RC

Media reports speculate dry, hot and breezy conditions with west wind gusts of 30 mph. Smoke from the fire is also visible from the surrounding areas. People are urged to stay safe and strong amid the raging fires.

(The above story first appeared on LatestLY on Oct 20, 2020 02:12 PM IST. For more news and updates on politics, world, sports, entertainment and lifestyle, log on to our website latestly.com).