Maharashtra: Man Fakes Death to Save Himself From Tiger, Spine-Chilling Video Goes Viral

A viral video uploaded on Twitter shows a man faking his death to save himself from a tiger, which was running around a paddy field. As the spine-chilling clip surfaced online, it was revealed that the near-death moment was experienced by a man in Tumsar in Bhandara district, Maharashtra. 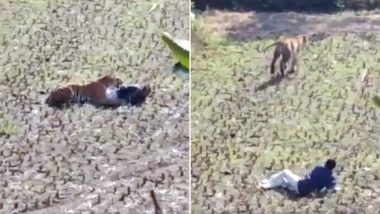 This man had just escaped what could have been a terrifying incident. A viral video uploaded on Twitter shows a man faking his death to save himself from a tiger, which was running around a paddy field. As the spine-chilling clip surfaced online, it was revealed that the near-death moment was experienced by a man in Tumsar in Bhandara district, Maharashtra. The clip has gained thousands of views since uploaded, and people are expressing their shocking reactions. Thankfully the man was not hurt, and the animal can be seen running away from him, as he was lying still. Duck Fools a Dog by Playing Dead! Other Times When Animals Faked Death to Escape From Tough Situations.

It was just like that story of a bear and the two friends, we have heard in our childhood. The short story spoke about two friends, who encountered a wild bear. One of the boys jumped up to the tree to save himself, and the other one faked his death. It appears like the man has taken a good lesson from this tale. The clip showed the man lying under a tiger with their faces extremely close to each other. An IFS officer, Parveen Kaswan, shared the video on Twitter.

You want to see how does a narrow escape looks like in case of encounter with a #tiger. #Tiger was cornered by the crowd. But fortunately end was fine for both man and tiger. Sent by a senior. pic.twitter.com/1rLZyZJs3i

In the follow-up tweets, another user shared a comparatively long video that showed what actually happened at the scene. The animal can be seen running across the field, trying to avoid people who have surrounded him. He grabbed the man. When he saw that many people in the area were still approaching him, the tiger gets up and runs away in the wild. During the scary moment, the man lay still.

How did he manage to remain calm?

Some Pointed Out the Sad Reality!

You get paralyzed by fear in such situation. The reflexive reaction of the mind/body is to lie still not provoking any vexation through struggle. The tiger is apparently no man-eater or the man wouldn't have been this lucky. Sad that we have harassed our wild life to no ends.

we need extensive training and sensitization across the country to educate people how to step back safely and give that space to our wild. will keep both out of harms way.

Even Tiger is lucky that He was not mob lynched by People.

It is surely a scary moment. We have often seen animals faking their death to save from getting attacked. But the sight of a human playing dead in such an extreme situation is hardly seen. His presence of mind is indeed remarkable.

(The above story first appeared on LatestLY on Jan 27, 2020 12:01 PM IST. For more news and updates on politics, world, sports, entertainment and lifestyle, log on to our website latestly.com).