A little Bengali boy's jibe on couples is going viral in which the little one says 'Turu Love' for 'True Love'. His expressions for "Oh My God True Love" are said as "Oo Ma Go Turu Love" and that has become a punchline. Not only is the video going viral, but some people have edited other clips using the little one's line. 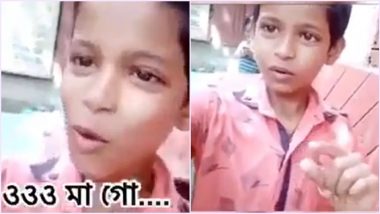 TikTok may be banned in India but that has not stopped funny videos and musical parodies from flowing on social media. The recent one which has gone viral is that of a young Bengali boy's reactions on couples. He says 'Turu Love' for 'True Love' which has left people laughing. While he wants to say "Oh My God True Love", he ends up saying "Oo Ma Go Turu Love". His video has now gone viral with people editing and adding more funny clips to it making "Oo Maa Go Turu Love" the new viral trend. This video may also remind you of the TikTok pair OMG OMG Girl Nithya and Fun Bucket Bharghav from South India.

It is not exactly known who is this boy or where this video first appeared, but there are sure more adaptations of it using his voice. In this video the boy says, if you can take permission from your girlfriend for your whereabouts, why not parents? And then he says, "OMG! True Love," but in his manner, "Oo Ma Go Turu Love!" That phrase has stuck on people are loving it. And it would not be wrong to say it has become the new meme template. 'Main Gareeb Hoon' Video of 'Poor Boy' Goes Viral as Twitterati Create Funny Memes And Hilarious Versions of it to Address Different Concerns.

It's okay if you haven't exactly understood what he meant, the punch is his version of "Oh My God, True Love". The same audio has been used by others to make funny videos.

So the idea is to take a dig at couples with the little one's phrase. So if you come across more memes and jokes about "turu love" you know it started with this little boy.

(The above story first appeared on LatestLY on Oct 18, 2020 09:07 AM IST. For more news and updates on politics, world, sports, entertainment and lifestyle, log on to our website latestly.com).