Photographer Waited for Four Years to Get the Perfect Shot of an Underwater Eurasian Beaver but the Viral Photo Gets Trolled Instead!

Photographer Louis-Marie Preau who reportedly waited for four years in a river to capture the perfect shot of the beaver has left the internet unimpressed as they troll the viral photo instead. 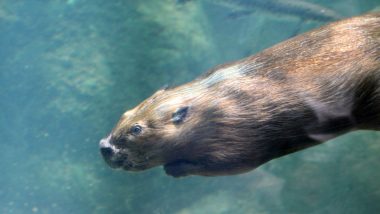 Wildlife photography is no easy job. It takes months and years of long experience, and patience to capture the perfect shot of the wildlife that redefine of what we actually think of the animals. Over the years, there have been many photos of animals, birds and other creatures that were captured candidly by photographers for the wildlife enthusiasts. While most of the photographers are significantly appreciated, this particular photo of an underwater Eurasian beaver that took the photographer painstakingly four years to get the perfect shot did not really impress the internet. Photographer Louis-Marie Preau who reportedly waited for four years in a river to capture the perfect shot of the beaver has left the internet unimpressed as they troll the viral photo instead. Viral Pics of Rare Black Panther ‘Saya’ Photographer Shaaz Jung Reveals It Took Him 5 Years to Track the Beautiful Animal; Here’s a Look at Photos From Kabini Forest.

Beavers play an important role in the river ecosystem. Eurasian beavers were nearly hunted to extinction by the middle of the 19th century. In France, the species was completely extinguished, until conservation efforts brought them back. Environmental news website, Treehugger shared the photo of the underwater beavers and explained how it took the photographer four years to capture the shot. “Every night, wearing snorkelling gear and weights, he would lie still as a log on the riverbed for hours,” noted the report. Finally, it paid off as Preau could capture the beaver in its most candid version. 2020 BigPicture Photography Competition Winners Announced: Check Award Winning Photos Showcasing the Best of Wildlife and Nature.

It took a photographer 4 years -- night after night in snorkeling gear and weights -- to capture this image of a beaver https://t.co/SMrokvhnhP #NaturePhotography pic.twitter.com/zHkmgSsYHJ

So, when Treehugger shared the photo of the beaver accompanies the story, it quickly went viral. But unfortunately, he did exactly get the reception he was probably hoping for as Twitter jokesters ran wild with his beaver photo trolling the pic instead.

I can’t explain it but these have the same energy pic.twitter.com/iU8oG8hyl1

They Began to Troll the Pic

Do you suppose he wondered what he would do with his nights after he got this pic?

Some Thought It's Animated

Why does this look weirdly animated? Polar express vibes

A Waste of Time?

No, if it took 4 years they can't get that time back. That's a waste of time.

However, Some Came in Support of the Photographer

how dare anyone go after this photographer. how about u put on some weights and snorkel for some decency and respect

What do you think about Preau’s work? It may seem funny to the internet, but knowing what the photographer went through to get the perfect shot, it once again proved how much effort wildlife enthusiasts put in to capture the perfect glimpse of the wild.

(The above story first appeared on LatestLY on Sep 26, 2020 09:03 AM IST. For more news and updates on politics, world, sports, entertainment and lifestyle, log on to our website latestly.com).