As the pictures gained momentum on social media, photographer Shaaz Jung also became a sensation, as people wanted to know more about his experience in capturing the rare sighting. In a recent interview, Jung revealed that it actually took him five long years, tracking the panther and capturing his movement in the jungle. 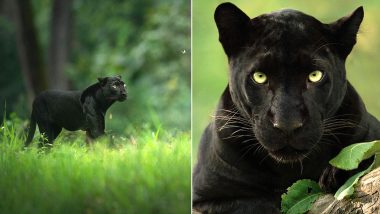 When Twitter handle, ‘Earth’ tweeted two magnificent images of a black panther, wildlife enthusiasts across the world went crazy. The gorgeously black coated animal is a rare sighting, and everyone wanted to know who the photographer is as the tweet initially did not include photo credits. As the pictures went viral on social media, the photographer, Shaaz Jung, himself commented that it was him who captured the stunning photos of the black panther, called ‘Saya,’ residing in the Kabini forest at Karnataka. Thousands of comments and appreciation poured in for the photographer with people praising his awesome skill and also thanking him for the glorious glimpses of the rare black cat. But the struggle was more than one can imagine. As the pictures gained momentum on social media, photographer Shaaz Jung also became a sensation, as people wanted to know more about his experience in capturing the rare sighting. In a recent interview, Jung revealed that it actually took him five long years, tracking the panther and capturing his movement in the jungle. Old Pics of Rare Black Panther Photographed by Shaaz Jung From Kabini, India Go Viral!

The 33-year-old wildlife filmmaker and photographer had reportedly spent 12 hours a day for five long years, solely documenting Saya—the black cat who has found its way into the Kabini forest. Jung’s Instagram account has more images of the majestic animal that shows glimpses of the panther in the jungle.

“When people see these pictures, they think there are several leopards, but actually there’s just one black panther where we are – one melanistic leopard in the dense forest of Nagerhole. So, it was like finding a needle in a haystack,” Jung was quoted as saying in Business Insider report. The photographer owns a wildlife safari lodge in Nagarhole National Park. He noted that it was one of the few places in the world, where tigers, leopards, the black panther, elephants, bears, dholes and more resides. 2020 BigPicture Photography Competition Winners Announced: Check Award Winning Photos Showcasing the Best of Wildlife and Nature.

The report further quotes him saying, for all these years, he has been going into the jungle at 6:00 am, spending all day out there till 6:30 pm, for seven days in a week. Dedication, much? This was once in a lifetime opportunity for Jung, and he did everything to get the best results.

Here's Another Pic of the Majestic Animal

Another interesting fact is that black panthers are usually found in evergreen forests, but Saya is found in the deciduous forest of Kabini. “He is not just surviving, he is thriving,” Jung added in the report. His aim was to go deeper and understand how the animal was surviving in a forest where he does not belong. The photographer’s journey of five long years paid him off well, we must say. His stunning photos of the black panther have been lauded by many and is making headlines since a few days.

(The above story first appeared on LatestLY on Jul 07, 2020 09:34 PM IST. For more news and updates on politics, world, sports, entertainment and lifestyle, log on to our website latestly.com).