PM Modi Stresses on Adopting Indian Dog Breeds in Mann Ki Baat; From Pariah to Bully Kutta, Know 5 Indie Breeds That One Can Get as Pets

But with the mention of Indian dogs one would only think of the street dogs that we see so commonly. But there are breeds in Indie dogs too. In this article, we tell you about 5 Indian dog breeds and their features. 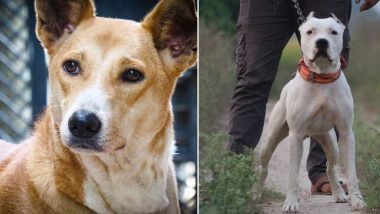 Indian PM Narendra Modi addressed the nation today in the 68th edition of monthly radio broadcast Mann ki Baat. PM Modi has time and again stressed the need to become self-reliant as part of Atmanirbhar Bharat. In today's address, he stressed that Indian citizens should become Atmanirbhar in all aspects, even while adopting pet dogs. He urged people to adopt Indian dog breeds. He said, "Next time when you think of keeping a pet dog, then you must bring one of the Indian breed dogs home." Some of the dog breeds that he mentioned were Mudhol Hound, Himachali Hound, Rajapalayam, Kanni, Chippiparai and Combai. Did you even know of these? With the mention of Indian dogs one would only think of the street dogs that we see so commonly. But there are breeds in Indie dogs too. In this article, we tell you about 5 Indian dog breeds and their features. Mann Ki Baat Highlights: PM Narendra Modi Lauds Farmers, Urges Startups to Make Toys And Develop Online Games Under Atma Nirbhar Bharat Initiative.

5 Indian Dog Breeds That You Can Adopt

This is an Indian Mastiff commonly known as Bully Kutta. It is comparatively large in size and good for hunting an guarding. This breed is more popular in states of Punjab, Haryana, Delhi and other North Indian regions. This dog breed is intelligent, energetic and aggressive. An expert in canine training or well-experienced dog owners can go for this breed. Pooja, an Indie Puppy is Training to Be Part of Police Canine Unit in Bengaluru (Watch Video).

Bakharwal dog is commonly called as Gaddi Kutta. This breed belongs to Jammu and Kashmir and Himachal Pradesh regions. Hairy dogs with bushy tails, they prefer colder climates for survival. They are usually used by locals for guarding their flock of sheep and cattle. They make great guard dogs.

These are probably the most common dogs you have seen on the streets but you may not know that it's a Pariah. These are medium sized dogs usually brown in colour. They have erect ears, a wedge-shaped head, and a curved tail. They have a double coat with soft undercoat. They are very alert as well as social, so they can make good pets. If trained well, they can act as guard dogs too.

These are typically white coloured dog breeds native from Tamil Nadu. It is called the Indian Sighthound or Polygar Hound. It is one of the purest breed of Indian hunting dogs. It is a tall breed which have good strength so they need more space. They have a good sense of tracking prey with smell, so they were commonly used for hunting in the olden days.

This is also an Indian hound dog breed. Their appearance is very similar to the Rajapalyam breed with long legs, elongated muzzle, arched back and a long tail. This breed also comes from Tamil Nadu and famous as hunting dog. They are usually in a single coloured coat variety (reddish brown, black or fawn). Same dogs with a mixed coat variety are called Kanni. They also require an open space as they need to be healthy and running. They are best for guard on farm spaces.

These are some of the Indian dog breeds that you can go for. Indian dog breeds are also efficient at hunting and guarding but most of us are unaware of these breeds. So do not underestimate the street dogs, they can be just as capable like the foreign breeds if trained and cared well for.

(The above story first appeared on LatestLY on Aug 30, 2020 03:11 PM IST. For more news and updates on politics, world, sports, entertainment and lifestyle, log on to our website latestly.com).