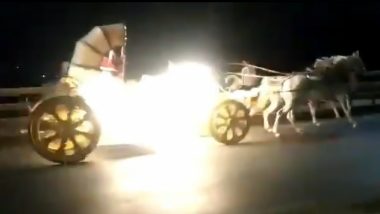 A terrifying situation of a horse chariot gone out of control in Pune has come up on social media. What is even more shocking is the chauffeur taking a triple seat on a bike to control the horses. Although the horses did not harm anyone, the chauffeur himself got minor injuries since he came under the wheels while trying to control the chariot. The dramatic incident took place at Pune's Koregaon park junction on Friday, December 6 and a citizen happened to capture it on his phone camera. Soon as the footage came online it has gone viral. Horse on Plane! Woman Takes a Pony, Her Emotional Support on American Airlines Flight Surprising Fellow Passengers (Watch Video).

It was a decked-up horse carriage, probably heading for some wedding function. But unfortunately, it lost control and started running down the Bund Garden Bridge in the city. In a short while, three men can be seen riding on a motorbike, approaching near the carriage, and the third pillion rider tried to control the horses. While getting the horses to halt, the jerk even brought down the pillion rider and he stumbled down. One of the news report mentions, the chauffer's name is Jitendra Kadam and he suffered from minor injuries. Even the horse is said to have suffered from minor injuries. Most Stylist or Most Ridiculous Bride-Groom Entry at a Wedding Reception? Video of Couple Flying and Landing on Bird Cage Goes Viral.

The video has amazed some people on the internet. Some called it straight out of a Bollywood movie scene. However, the accident could've been worse if there was more traffic on the road at that time. The police department from Koregaon Park will be investigating the matter. "As of now, we have not registered any complaint against the horse-and-carriage owner," the police have informed. This incident also raises a concern about using horse carriages for wedding functions and what would've happened if the horses could not be controlled at that point.

(The above story first appeared on LatestLY on Dec 09, 2019 08:59 AM IST. For more news and updates on politics, world, sports, entertainment and lifestyle, log on to our website latestly.com).