Punjabiyan Di Shaan Vakhri? This Video of Punjabis Showering Currency Notes and Foreigners Picking Them Up Has Social Media in Splits!

A video going viral on social media shows a group of Punjabis similarly showering notes in what looks like some festivity. 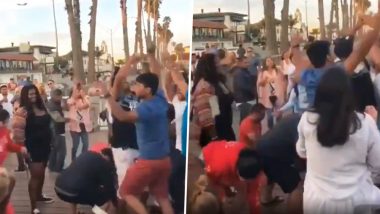 Note showering is quite a normal practice at Indian festivals, weddings and other celebratory events. It is almost considered a status symbol and wealthy Indians don't mind splurging a little too much. While raining of notes is not new to Indians, foreigners are surely not used to the concept. A video going viral on social media shows a group of Punjabis similarly showering notes in what looks like some festivity.

In the clip, a group of guys can be seen dancing to loud Punjabi music on a roadside while the firangis join. The men then start showering notes grabbing the attention of the passerby. While some continue to groove, most pick up notes lying on the pavement only to be joined by more people. For those who understood, this is quite an irony of sorts. After the video went viral on social media, Indians can't stop laughing at it. 'Hello Friends, Chai Pi Lo' Aunty is Hilariously Dancing to Zara Sa Jhoom Loon Mein in This New Video

Punjabis throwing dollars while dancing and firangis picking them up 😂 🤣 pic.twitter.com/BL0AIu9PC1

People commented saying that they have never before seen anything like this and it was quite a moment of pride (well, arguably). After being posted on Friday, the video has garnered over 44,100 views. Many replied to the post with Nawazuddin Siddiqui's dialogues from Sacred Games which were quite a rage on social media after its release. While most commented with light humour, not everybody seemed supportive of throwing roads on a pavement. Punjabiyan di Shaan Vakhri indeed!

(The above story first appeared on LatestLY on Aug 06, 2018 04:05 PM IST. For more news and updates on politics, world, sports, entertainment and lifestyle, log on to our website latestly.com).