Social media users can't stop laughing at her hilarious dance moves have been sharing it widely on the internet. 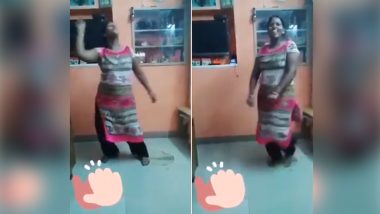 Somvati Mahavar's popularity is not over yet! The aunty famous on the internet for her 'Hello Friends, Chai Pi Lo' videos has more talent in store. Along with her Chai Pi Lo and Aam Kha Lo videos on the internet, she used to showcase her dancing moves. One of her videos that have recently caught the fancy of the internet is her dance to the popular 90s song is 'Zara Sa Jhoom Loon Main'. Social media users can't stop laughing at her hilarious dance moves have been sharing it widely on the internet. The video going viral has over 5.7 reactions, 1,000 shares and 498,000 views on Facebook.

Mahawar has over 28,000 followers on Facebook and has recorded more than 400 videos. While her 'chai videos' are popular on the internet, she has also recorded videos offering watermelons, muskmelons, mangos and paneer dishes to her social media followers. With her videos becoming the butt of all jokes on social, memes and jokes followed. Inspired by her 'Chai Pi Lo' videos, Mumbai Police created a video urging people to wear helmets while driving.

Sanjeev Srivastav was yet another personality who became a social media star overnight. Videos of him dancing to Govinda songs was quite a hit on the internet. His fame even brought him to national television and was appointed the brand ambassador of Madhya Pradesh's Vidisha Municipal Corporation. People who similarly rose to fame include Priya Prakash Varrier, Pakistani Chaiwala, Nepali Kacheriwali, Salt Bae among others.

(The above story first appeared on LatestLY on Jun 22, 2018 12:09 PM IST. For more news and updates on politics, world, sports, entertainment and lifestyle, log on to our website latestly.com).