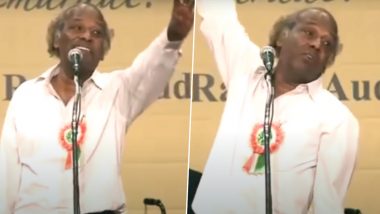 Famous poet Rahat Indauri is no more. We lost the noted Shayar and poer on Tuesday due to a heart attack while he was also infected with the coronavirus. He was admitted to Arvindo Astpal late night of August 10 in Indore, Madhya Pradesh and Rahat Indori's son Sutlej had informed his fans about his ill health. However, later Rahat Indori himself tweeted about his condition and that he has been admitted to the hospital due to initial signs of COVID-19. Rahat Indori himself provided the information on Twitter. He wrote, 'My corona test was done yesterday and initial symptoms of COVID-19 appeared, which has been reported positive. I am admitted in Aurobindo Hospital, pray for me that I defeat this disease as soon as possible. "  He further also requested that to not call him or his family at home and that he will continue to provide updates on Twitter and Facebook. Check Tweet:

Rahat Indori's Urdu poem, "Bulaati hai magar jaane ka nai" was going viral a few months back. Many memes and jokes were made on this Shayri as well. He had recited this famous poem in Ghazal programs of his. Here are the lyrics of "Bulaati hai magar jaane ka nai":   ‘Bulati Hai Magar Jane Ka Nahi’ Funny Meme Origin Story: Know Why Netizens Are Making Hilarious Jokes and Reactions Ahead of Valentine’s Day

Dr Vinod Bhandari of Aurobindo Hospital has said that he suffered two heart attacks after being admitted to the hospital. After that, his condition only deteriorated. He even had 60 percent pneumonia, according to media reports. Corona cases are increasing rapidly in Madhya Pradesh. The number of corona patients in the state has crossed 39 thousand. At the same time, the death toll has reached close to one thousand.

(The above story first appeared on LatestLY on Aug 11, 2020 06:05 PM IST. For more news and updates on politics, world, sports, entertainment and lifestyle, log on to our website latestly.com).